PDFs with my slides from the ITUWorld event in BKK today: the Future of the Internet

Update: after receiving some very detailed and much appreciated feedback on my presentation at ITUWorld in Bangkok, today, I wanted to clarify a few important points that may not have come across as clearly as I intended:

Update 2:  a short review of my talk by the ITU, here (and quoted below) 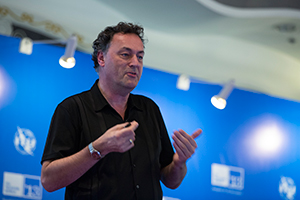 “Inspirational futurist Gerd Leonhard delivered a compelling, challenging, and at times chilling glimpse into a possible near future dominated by data, digital dependence and dramatic sociological changes. Over the next ten years, human to machine interfaces will take us far beyond connected fridges, self-parking cars and intelligent wristwatches – and at an unbelievable pace, as real life begins to outstrip fiction. Artificial intelligence will augment our bodies and extend our personalities into devices as chips as small as 5 nanometres across become fast, cheap and embedded in everything. This is the new version of the internet: the internet of everything with up to 100bn connected devices. We will be living inside a computer – and our mobile phones will function as an external brain.

Future interfaces will lead to prediction markets, the quantified self, unprecedented access to huge amounts of information, moving from typing to gesturing to going inside a device to pull out data. We can already operate Google glass by blinking – in the future, thinking will be enough.  Used responsibly, this can bring unprecedented benefits, increased efficiency, vastly more comfortable and convenient lifestyles. But there is an equally huge associated risk, as well as the danger of unintended consequences in an age of exponential expansion in connectivity. One simple example is how by leapfrogging over television to YouTube in Indonesia has changed society, changed how people behave, act and think as they have become “more transparent, more digitally naked.”

And those risks are nowhere more evident than in the downsides of Big Data. An economy of data, worth up to 15 trillion dollars in new commerce and activities, could trigger #datawars over the power than massive money puts in play – and pollution in the form of surveillance, lack of trust and flawed privacy. Privacy and security failure is the present as “the power of technology exceeds the scope of ethics”. Cloud computing, big data, scanning technologies and other new technologies are running our lives in a deep way. Recent world events make it clear that capturing pretty much everything is technically possible – yes, we scan, as Gerd punned. And growing awareness of that is set to cost the US, as international companies – and even countries – consider putting their clouds, and their business, elsewhere.

Privacy will be the domain of the rich, able to afford encrpyted email and to opt out of permanent surveillance and intrusion. Privacy and trust have been eroded to the extent that police scanning the number plates of passing cars keep that information for up to five years; or bluetooth-enabled rubbish bins connect with mobiles to register anyone walking past. It’s all possible; but being able to do it doesn’t mean it should be done. Artificial intelligence, M2M communication, the Internet of Things – none of this might happen unless we can forge new social contracts, ethics, a rule of law that makes us feel safe and lets us work. Connectivity is like oxygen, necessary for (modern) life. We are addicted to our devices, to the extent that hotels are already offering guaranteed lack of connection for a fee – “being offline is the new luxury.”Technology is empowerment, shortening the distance between expert and consumer, enabling us to print our own shoes or personalized mobile phone covers, for example. But connectivity is also a liability, enslaving us, stripping us of privacy and perhaps even beginning to make decisions on our behalf.

So what will be important for the industry in this future reality that is already upon us? Trust and ethics are key, according to Gerd. Without establishing a trust framework, no one will survive the next five years. Sector convergence and consumer power are shaping the market. People need to be given control, government laws on copyright and payment must be abandoned. “Forcing people to pay is like forcing people to love. It won’t work” – they will simply migrate to free and more. And telcos are no longer operating in a clear-cut sector, but are instead competing in an arena made of many, and often new, players. Being successful in an exponential world means thinking lateral, not linear, changing mindsets, “bringing in the outsiders who are trying to kill you.” “If you are in the technology business, you are in the trust business,” according to Gerd. If you want to survive, that is. And what about the data bleeding from the internet in every action and interaction? It’s time for a digital bill of rights, time for the industry to not just run ever-faster networks but also to accept responsibility, establish frameworks- and the ITU has a role to play in that arena.