TheFutureShow.tv website is live: intro video today, big launch on Monday! You can help, too:)

Today is a big day for me as I am taking the first veil off my latest project: The Future Show with Gerd Leonhard (TFS). You can now view my short introduction and overview video on the brand-new TFS site, or below. This is only a short clip in which I describe what TFS is all about – the big launch is on Monday April 28, with the first episode on ‘Privacy Failure' available sometime in the am (CET).  Also on April 28 or 29, a major international news site will run a guest post by me, on privacy and wearable computing, linking to this episode. 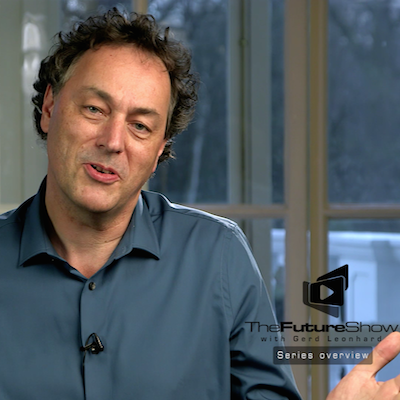 The second episode will go live 2 weeks late i.e. May 12, and will cover the future of knowledge and learning. Every episode is featured via a blog post on a major international media platform – stay tuned for the details!

Technology and the world that we are living in is changing exponentially and most of the time it’s hard to keep up – especially for those who aren’t experts, geeks or early adopters.  This is why I created this new web-TV show which aims to present and explain the most pressing issues and exciting future trends to the general public – whether they’re savvy consumers, worried parents or curious professionals and business influencers. Every TFS episode will deliver easily digestible insights in a critical, yet engaging and exciting way. TFS’s goal is to show how technology’s exponential advancements will radically alter and re-design the way in which we experience the world and interact with each other in the immediate and longer term future.  The episodes are between 4-7 minutes in length and cover topics that are timely and relevant, impactful and of strong interest to the general public as well as to the global business community. Themes include: Privacy Failure, Human-Machine Futures, The Future of Jobs, Digital Obesity, Sustainable Capitalism, Big Data and many more.

The first 5 episodes ( see below), were recorded in January 2014 at the Mandarin Oriental Hotel London. The Future Show series is produced and directed by former BBC broadcaster, the fabulous Shaheera Asante-De Waele.

Update: you can help me launch this campaign by signing up for the Social Seeder action that will take place next week Monday and Tuesday (we will email you with further details)

THE INITIAL 5 EPISODES (AVAILABLE ON A BI-WEEKLY SCHEDULE):

We will continue the conversation with our audience beyond each TFS episode through this website and via social media such as Twitter and Facebook. This will include additional materials on the topics raised within each segment, including podcasts, slide-shows, video clips, PDFs, and social media discussions that keep the debate alive on issues touched in the series.