The future of music: streaming to 2 Billion ‘paying’ users – if only the industry would allow it!

Lately, it seems like I just can't escape the increasing coverage on much certain misguided artists, labels, music managers or other music industry people dislike streaming / on-demand music platforms such as  Spotify, Deezer or Simfy etc.  Even thought I have vowed to stay out

of the ‘future of music' debate because it is such an utterly dysfunctional industry run largely by unimaginative and egocentric execs and a bunch of lobbyists, I keep getting a lot of questions about just how exactly musicians and writers (and whatever the industry will become) will ever make enough money from what the leading streaming platforms are paying them.

If I am correct, right now, Deezer has roughly 6 Million paying users and Spotify (allegedly) has snagged somewhere around 15 Million paying users, so it is quite obvious that their possibilities for monetization are extremely limited. Considering the estimated 1.2 Billion Youtube users many of which are using YT as their primary (and free) source of music, all currently available streaming services pale in comparison. Expecting a major flow of new money coming from the streaming services – in their current form, and with their current pricing – is obviously an illusion (but then again, hunting and killing-the-golden-goose is apparently a favourite pastime of many music industry ‘leaders').

So how would they reach 100s of Millions of paying users, within the next 3 years? Do the labels really want them to grow that big, or are we facing a similar problem than Netflix ha(d)s with the major movie studios? Is it fair that the major labels, and the large independents, hold equity in the likes of Spotify, and that these services cannot lower the price of music to get more people to sign up?

Let me be frank.

Basically, the problem with streaming music is not that the users are unwilling to pay (or are mostly evil freeloaders), or that the streaming services are paying too little in licensing fees. The problem is the music industry's self-serving, self-defeatist, monopolist and uncooperative attitude, and it's legally sanctioned extortion practices when it comes to music licensing, combined with the still prevailing power of their global distribution cartels that make a real solution impossible.

Keeping this in mind, let's do some math, shall we?

Clearly, the solution to the streaming music conundrum is to a) get EVERYONE involved, and everyone to ‘pay'  – and with that I mean either directly, or through bundles, or through advertising, or even via taxes b) build a new, premium-services economy on top of a ubiquitous ‘music like water' scenario. This could include offers such as HD downloads, remote viewing of live concerts, augmented reality apps, fan clubs, deep archives etc.

So, to all the execs running the likes of Deezer, Spotify, Rdio or Simfy (and to those that have invested in them) I think this is your only way forward:

a) You must make your offering so powerful, so cheap, so sticky, so irresistible that every single mobile broadband user wants to have it – not just the 2-3 % of the population that may eventually sign up for it now (which incidentally is exactly how many people paid for music downloads on iTunes, in the past). You'll need to get 90% of those connected consumers engaged with you, at a very low but profitable price-point, and then convert them to other premium services. You need to be better than Youtube, and you can- before Youtube just shells out the money and deflates the entire record industry business model in one big stroke.

b) I hear you (and God knows, I know how this works, personally): the labels won't allow it, and neither will the publishers or the rights societies. But mark my words: if they don't come around, by hook or by crook, you won't have a viable business. They will take your money and your equity, and run – once it's clear that most consumers won't pay as much as they want, or when most major artists will want to opt out. You can play hardball now, succeed and become indispensable (look at how Netflix did this) or slowly wither away as nice-to-have niche services that are guaranteed to be perpetual money losers sucked dry by old distribution cartels.

The money is there, clearly – now who has the guts to really make this happen?

Global music revenues chart by Statista (not including concerts etc) 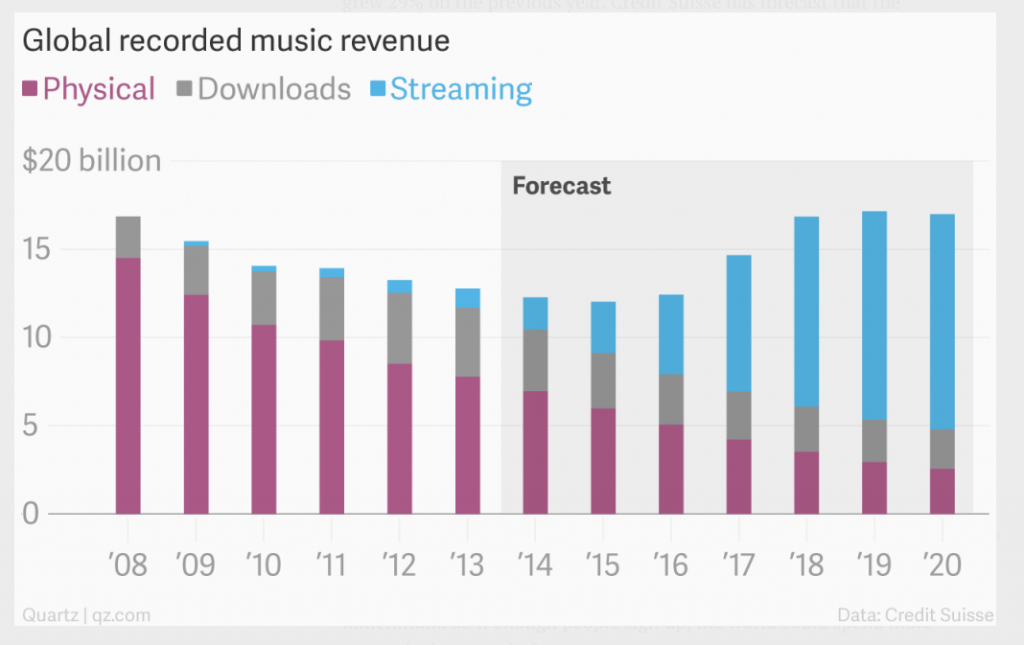 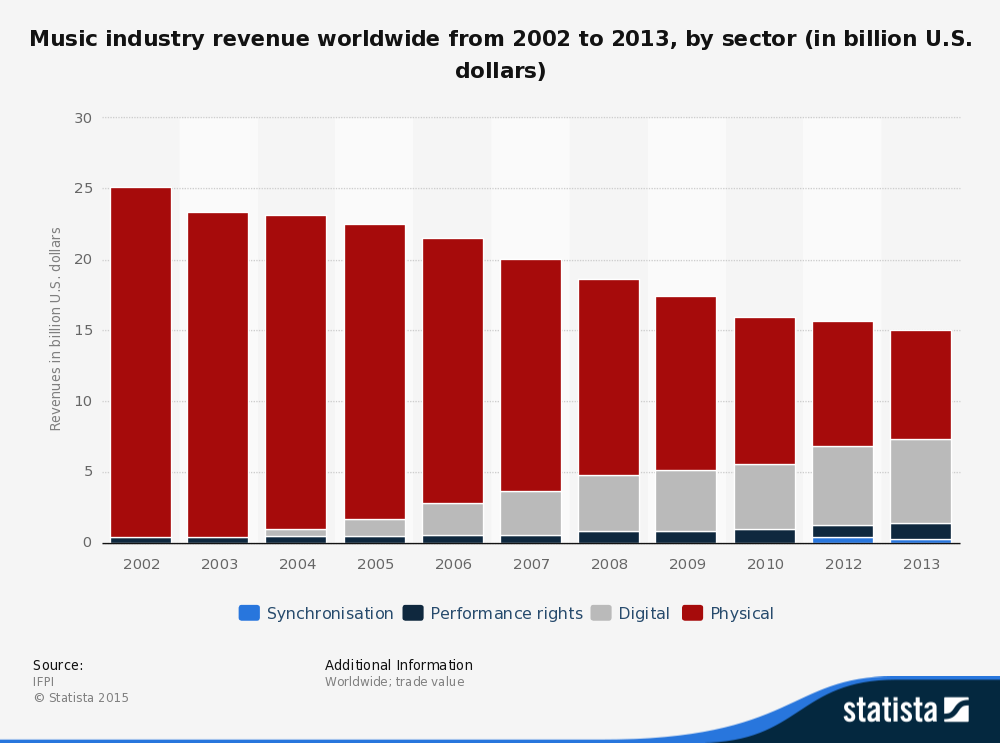 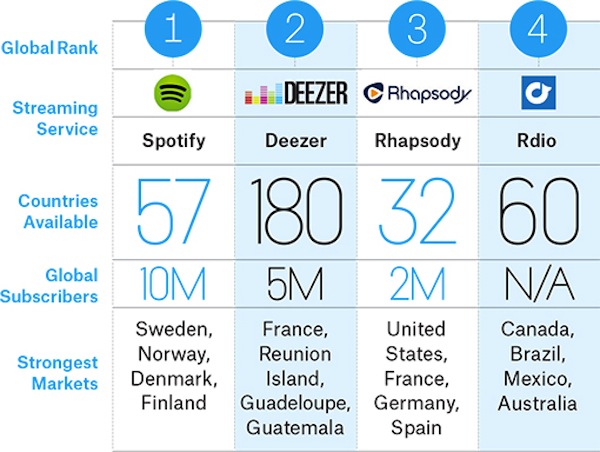 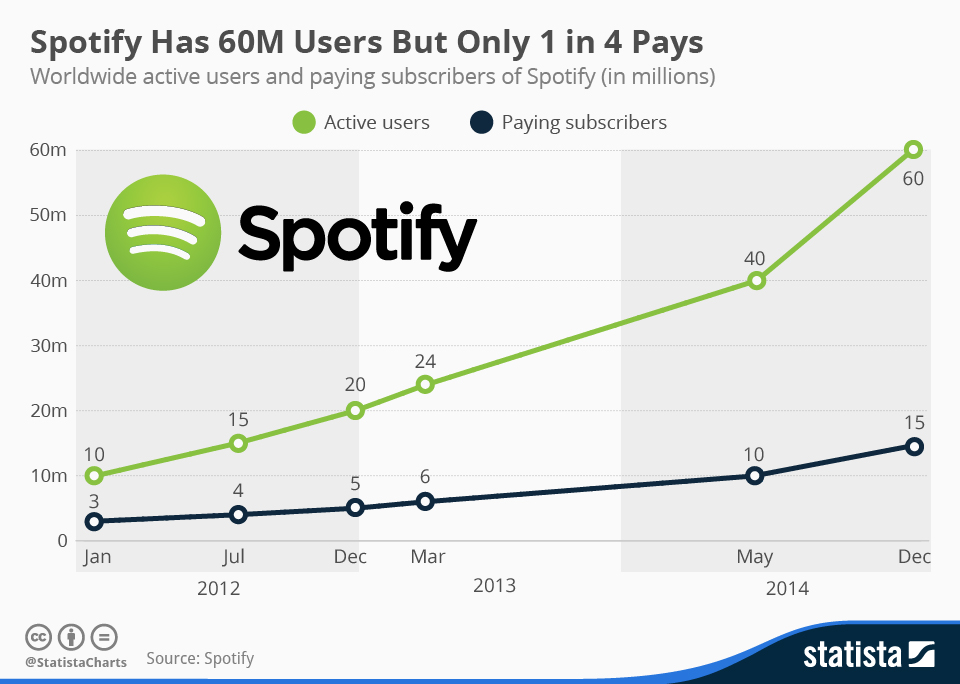