Thanks to Paul Armstrong for conducting this interview on my new book Technology vs. Humanity (pre-order via the site while the discount still applies:)).    Read this exclusive preview PDF about my book: Technology-vs.-Humanity Gerd Leonhard Preview

Here are some of the best excerpts: 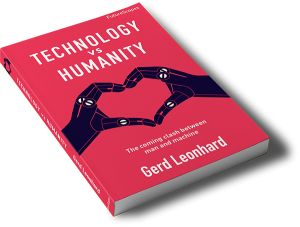 Buy the book before it's too late 🙂

“Technology is no longer just a tool we use to achieve something – we are actually (as McLuhan predicted) becoming tools (ie. technology) ourselves. Some of my futurist colleagues call this transhumanism – something I personally think we should examine with great caution… When this happens we will need to decide of we want to ‘merge’ with the machines or not, and the stance I am taking in this book is clear on that discussion: we should embrace technology but not become it, because technology is not what we seek, it’s how we seek”

“It is already pretty obvious that trillions of dollars are spent on making the world technologically ‘smarter’ (smart cities, smart farming, smart energy…) but very little is spent on getting humans ready for that future – in fact, while machines get smarter we may actually become dumber (see the glass cockpit problem where pilots literally forget how to fly because of the exceeding instances of automation”

“Today we are using smartphones to connect to the cloud aka ‘the global brain’. They are brain extenders, basically. Wearables are next, plus augmented and virtual reality which will become so powerful that many people will never want to be without it – seeing the world differently is a very powerful thing! Voice control will quickly become the new normal; in less than 5 years typing will be replaced by just speaking to whatever device we are using. Brain-Computer Interfaces are already here but again… once we have computers that match our own brain capacity (and then… with an IQ of say 50.000?), and better connectivity and better batteries… it could also become the ‘new normal’.

Implants would follow (and already are being investigated) to make that interface even more seamless. The final step – the 2nd neocortex (Kurzweil) – is still pretty far away, though – in overall terms maybe less than 50 years, though. We will need to decide, very soon, where humans end and machines start, and vice-versa- and this is an ethical question NOT a technological challenge. In my view, significant technological upgrades to humans are really more like downgrades because we would lose so many human-specific abilities and idiosyncrasies in return”

The reality is that if you ask the question IF technology can do something or not, the answer will almost always be ‘yes’, already – there is pretty much no limit to what technology can do in the very near future. The WHY question will replace the HOW question.

Watch the Tech Vs Human Film: 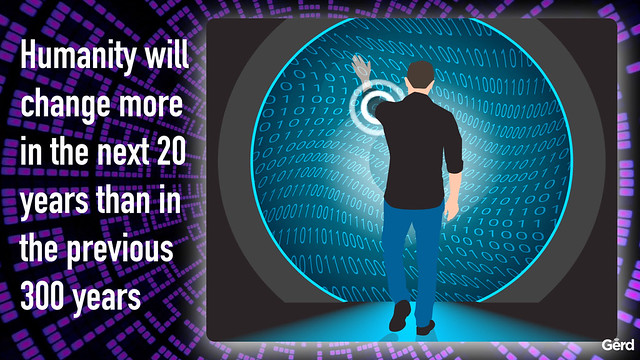