Must-read: “Purely intelligent creatures, whether people or machines, are bad for humanity” Sundar Sarukkai on AI

I just ran across this really powerful piece on AI, by Sundar Sarukkai, quoted below – really changed the way I think about AI. High-lights and images are mine. Here it is!

The real worry about these technologies is the emphasis on intelligence rather than other characteristics of human beings. AI is an attempt to reproduce superintelligent humans. It chooses one aspect of human beings, namely this vague idea called intelligence, and artificially magnifies it to an extent that allows the machine to do things far better than humans can. The success of these machines only reinforces the success of a particular view of human beings: not their vulnerability and finitude (characteristics that have catalysed so much of great 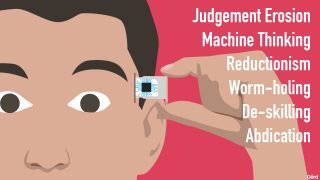 music, art and literature), but largely some calculative capacity.

Purely intelligent creatures, whether people or machines, are bad for humanity. The restricted meaning of intelligence in AI is that associated with superlative memory, calculative power, decision-making capacity, high speeds of action, etc. These machines thus become superbeings, and a society filled with many superbeings is a recipe for disaster.

Being human is not about superintelligence and super capacity. It is about living with others and learning to live within our limitations. Vulnerability, decay and death characterise any living form. AI machines are a mirror to our desire for immortality and absence of human weaknesses. There is nothing wrong in this desire per se, but building surrogate machines is not the way to achieve this.

AI has not been used to get rid of poverty, to have more equitable distribution of wealth, or to make people more content with what they have. The types of AI we have, including war machines, will primarily be dictated by profit for the companies that make them. Is this what we need? It would be a sad world where ‘life’ forms come into existence based on the logic of profit.

Unlike a gun, the AI machine is a performer in itself. To think that such machines will be subservient to us all the time is wishful thinking. We haven’t learnt anything about the master-slave relation if we think that these machines are only meant to be our ‘slaves’ which make our lives ‘easier’. All technologies come with a cost (not just economic but also social and psychological) and we have very little idea of the cost that AI will extract from us. Most worryingly, these thinking machines, which are smarter than us, will know exactly how to manipulate us to the extent that we will not be able to see their negative effects….

Sundar Sarukkai is a professor of philosophy at the National Institute of Advanced Studies, Bengaluru

Read the rest of this piece at TheHindu.com