Will we need another ‘Oppenheimer moment’ to take action on our future?

In Gerd’s recent podcast with Matt Ward from Disruptors.fm, they discussed a theme from his last book Technology vs. Humanity, a concept he calls the ‘megashifts’. These are the 10 most important disruptive forces we need to investigate, such as datafication, virtualisation, automation and cognification.

As these exponential changes come charging towards us, Gerd looks to what he calls our ‘Oppenheimer Moment’: humanity’s urgent reflection on the choices we’re making, and the results of those choices. The ‘Oppenheimer Moment’ was a phrase coined after physicist Julian Rober Oppenheimer, the inventor of the atomic bomb. In the 1940s Oppenheimer was in charge of the Manhattan Project, tasked to invent the atomic bomb. In 1945, the bomb was unleashed on Japan, signalling the end of WW2.

When Oppenheimer witnessed the actual use of the atomic devices he had helped to make possible, he was desperate: “Now I am become Death, the destroyer of worlds.” Within two decades after Hiroshima and Nagasaki the discussion about Nuclear Non-Proliferation Treaties (NPTs) got started, effectively keeping us safe since their ratification in 1970. That was their ‘Oppenheimer Moment’ – learning the true danger of a seemingly peaceful and progressive technology.

Will we need a similarly catastrophic incident to jump-start a serious debate about certain future technology, asks Gerd, and if so – when? He points out the need for pause and reflection on the unbridled glorification of a world run by algorithms and machines. What we need, he says, is some sort of treaty on Artificial General Intelligence, and Human Genome 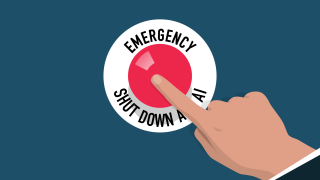 Otherwise, we may find ourselves at risk of unprecedented digital violence. Think large-scale cyber-warfare based on faulty black-box AI decisions, or unwarranted use of private data, revealing a population’s inner-most secrets.

“Should we just do whatever technology allows us to do?”

His answer is simple: education and certification. Gerd proposes a sort of ‘driver’s-license’ for politicians and policymakers, a central certification that elect certain people to a council of leaders. Like a collective of wise men and women, these leaders will decide on regulation, and guide us through this critical inflection point. The will be the Mission Control of humanity.

If we can manage that, it may not take tragedy to decide what happens next.