In a letter addressed to top executives, a group of Microsoft workers who worked on the company’s HoloLens headset sent a letter to Microsoft CEO Satya Nadella and president Brad Smith requesting they cancel the company’s $480 million contract to supply the devices. Why?

The group said the contract terms had “crossed the line” into combat applications. In essence, the Microsoft workers believe that intent to harm is not an acceptable use of their technology. The technology could be used for tactical augmented reality and creating “Enhanced Situational Awareness”.

What does this mean? Take a look at the video below.

The Microsoft workers used their own Twitter channel to request the cancellation of the military contract.

(You can find a full copy of the letter here.) 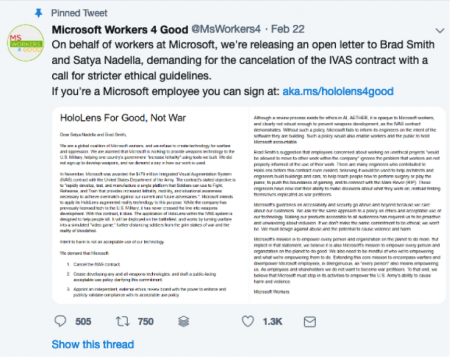 Their Twitter channel also called out a number of use non-harmful use cases foe Hololens technology:

In the past, President and Chief Legal Officer Brad Smith had said that Microsoft employees who have ethics problems with the application of the products they work on can move to work on other products within the company. To which Microsoft Workers replied:

“There are many engineers who contributed to HoloLens before this contract event existed, believing it would be used to help architects and engineers build buildings and care, to help teach people to perform surgery or play the piano, to push the boundaries of gaming, and to connect with the Mars Rover (RIP).”

“We made a principled decision that we’re not going to withhold technology from institutions that we have elected in democracies to protect the freedoms we enjoy… We were very transparent about that decision and we’ll continue to have that dialogue [with employees].”

This is not the first case where employees of big technology companies are requesting their organizations to be serious about ethics and digital ethics more specifically.

In November last year, Google employees organized a “global walkout” demanding more transparency from Google around its handling of sexual harassment, a clear case of corporate ethics. And just last week, Google announced that it would no longer force its full-time employees or Temps, Vendors and Contractors (TVCs) to resolve disputes such as harassment, discrimination or wrongful termination through arbitration.

Also in November last year, Google employees were protesting against the Dragonfly project: it would help the Chinese government extend its already extensive surveillance state, and it would signal that Google is willing to capitulate to other governments who want to censor the internet. The fight is not over, but could it be that we are witnessing the start of a corporate spring, where employees empower themselves to create a digital ethics culture?