The future of work: technology is rapidly automating every single job that has any machine-like component (my guest post at Economic Times India)

“The concept of ‘work' has been at the heart of both the industrial as well as the information society, along with ‘jobs' and ‘growth' and that most rapidly outmoding term, GDP (expect a new metric to emerge here, soon, along the lines of ‘gross national well being'). But what will work mean in a knowledge society, or indeed in some form of an ‘experience society'? What will happen when merely maximizing efficiency and productivity becomes the chief domain of machines, rather than humans?   Most of us used to work because we needed to earn a living. Those that didn't work in the traditional sense such as artists, spiritual leaders, rich heirs and the independently wealthy, drop-outs or those that were somehow unfit to work, were often looked upon as a burden to society since their contributions were not measurable by conventional metrics. Does an artist or an inventor or an author ‘work' in the same way as an engineer or a factory labourer? Hardly. Yet, these more ‘right-brain'- dominated occupations may be the destination that many of us may be headed in, soon.

The distinction of ‘having work' or not will change very soon as ‘work' in its traditional sense will be increasingly hard to come by in the near future; technology is rapidly automating every single job that has any machine-like component. This is an inevitable trend that will change our society at the core. In less than 7 years, it will not take some 337 low-skilled workers to assemble an iPad in China – it will take 20 smart robots and 20 workers running them.

Imagine a time in the not too distant future when ultra-smart technologies and software algorithms, ‘digital butlers' and personal cloud-based software agents (artificial intelligence / AI) will do a lot more than show us the fastest route on digital maps or advise us on which restaurant to avoid when we travel. Instead, imagine AI-powered services filing our taxes for us or plotting our physical exercise according to our actual needs and body readiness at that very moment. In the past, many data-crunching tasks such as accounting were handled by real people using computers to find answers that made sense to humans. Most of this is sure to vanish as machines become truly and deeply intelligent, and as interfaces go from type to speak to gesture to blink to ‘think'. The truly scary moment will be when we start to ‘live inside a giant computer', or, worse, when computers live inside of us – but that's for another story, and I don't think our world will become that kind of dystopia. However, the bottom line is that automation will eat most of our jobs for breakfast, and there is as little we can do about as the horseshoe maker could do about the railroad's inevitable advancement.

I therefore think that the term ‘work' itself may soon become quite useless. I propose to create a new term: workupation. This fusion of ‘occupation' and ‘work' might be better suited to describe our future because whatever we will be occupied with is very likely to become our new work, monetised i.e. paid-for in a myriad of new ways, many of which are inconceivable or utterly unfeasible today. Just take a look at how Flattr is proposing to pay people for their journalistic contributions, and how social reputation is already metered on platforms such as Klout or Peerindex.   We are rapidly becoming a truly ‘networked society' and ‘work' is one of those core disruption zones that is impacted by the exponential advancements in ‘big data' technologies, machine intelligence, robotics and overall automation. Crowdsourcing, tele-working and the globally overall dissolving barriers between industries (e.g. Google's self-driving car which is now forcing the automotive business to reimagine what they do) are additional trends that impact the future of work.

We must also consider that the global trend towards mobilization, the rampant consumerization of IT and the total empowerment of consumers that goes with it, as well as the explosive growth of social media in almost all industries have already led to an increased blurring of private versus business matters. Recent studies have confirmed that many of us are now working 10-20% more than before we had those powerful smart phones and social-business-networks. It is already hard to say if what we are doing at any given moment is ‘work' or not – it is just simply ‘what we do' and often what we feel passionate about – and this trend will only get stronger in the future as we are leaving the menial data-driven and somewhat mechanical tasks to smart machines and move on to focus on our human-only capabilities. This, to me, defines the shift from work to workupation – we will be occupied with projects and issues that really matter to us rather than those that require machine-like skills or (worse) machine-thinking; and of course, machines will beat us hands-down at being cheaper, faster and more reliable on 99% of those tasks, as well.  Technology is advancing exponentially. Imagine what this means 5 years from now, when your kids have to decide what to study or how to plan their career path: just-in-time learning is certain to replace just-in-case learning. It also is clear that we are heading into a VUCA world (a military term that stands for volatility, uncertainty, complexity and ambiguity) where it may be more useful to learn, train and prepare ‘on-demand' and ‘in flows' rather than by traditional cut & paste learning methods. As a case in point, will we still need to learn languages if our mobile devices can translate our speech in real-time, into 20+ languages? Yes, I personally believe that there will be plenty of reasons why our kids should learn languages – after all, real knowing needs doing and embodiment – but these technologies will certainly change the way that they look at the world, and make those decisions much more complex.

So what will happen when smart machines and AI take over 30-50% of our jobs? How will we cope with what we now call ‘unemployment' of over 50%? This will be nothing less than a total redefinition of work , jobs and employment, itself, and maybe those of us that have been lucky enough to consider their work to be what they would do even if they did not have to do it – or would not get paid for it -, those that have found their true calling regardless of remuneration, can show us the way towards this future. A future that will measure the value of our work not by ‘units' that we have turned out, not by our contribution to increasing the GDP/GNP by merely increasing consumption or profits.  A future that will measure our contributions wider, deeper and ultimately in a more human way” 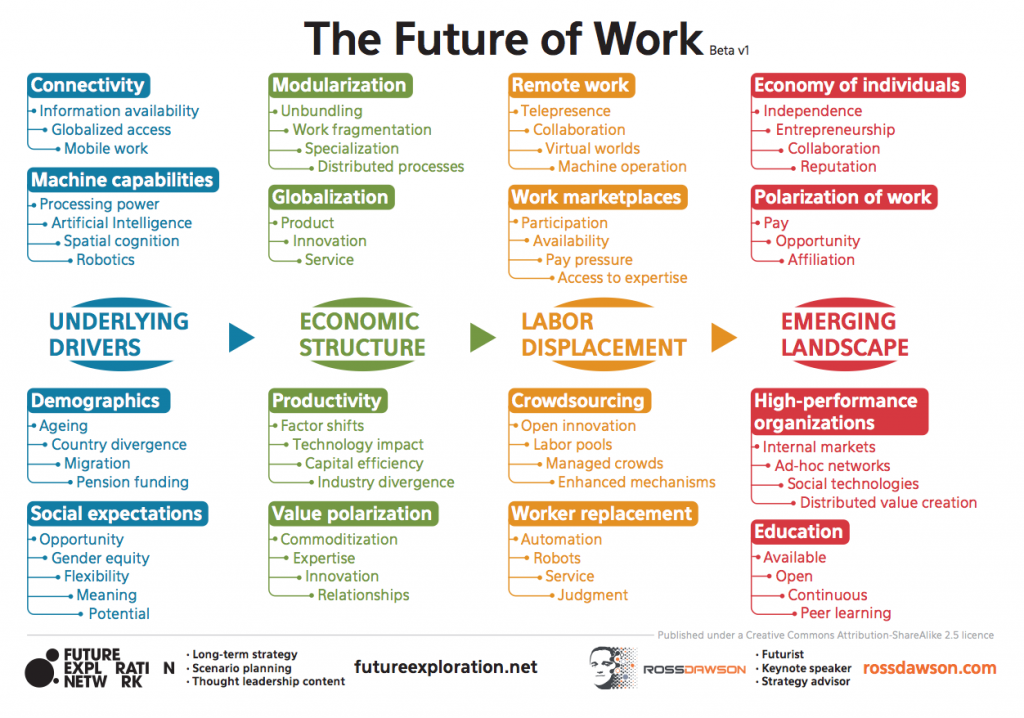