What the New York Times Could Have Been (via LinkedIn, Michael Moriz, Sequoia Capital)

Really good piece on what went wrong with the NYT's digital strategy and what Naspers did right, instead. The bottom line is, of course, that Naspers success was / is not based on ‘selling content'.  Here are the best snippets (hear the irony dripping:)

In 2000 – admittedly the height of the dot.com zaniness – the New York Times had revenues of $3.6 billion and operating profit of $635 million. Last year, its revenues were $1.6 billion and operating profit was $158 million. Its balance sheet is creaking… Naspers’ astonishing progress is in stark relief to the plight of the New York Times, laid out in turgid, repetitive detail in the leaked 97-page memo, apparently six months in the making, that concludes with the breakthrough idea that the organization should “consider a task force to explore what it will take to become a digital first newsroom.” Apart from the revelation of a declining web and mobile audience, there are several other aspects of the report worth noting. The first is the constant allusion to perpetual cat-fights between the two sides of the organization – the journalists and the business people – as if neither recognized they are engaged in a war of mutually assured destruction or that their real

enemies lurk outside their building. The second is the company’s struggle with the fact that three quarters of its revenue comes from subscribers nearing their graves. The third is the difference between a company whose leaders were born on the web and those led by people struggling to come to grips with it…. The printed newspaper still carries the slogan, “All the news that's fit to print” – a slogan that is now so patently false that it sounds like a spoof borrowed from The Onion. Of the 32 people on the Times' masthead (the list of its senior people), four are dead and none of the titles include the words “software,” “engineering,” “design” or “technology.” To further the indignity, right in the middle of the banner for the NYT.com home page is the phrase, laden with misguided symbolism, ‘Today’s Paper.’ But most revealing of all is the choice of language in the 97-page report. The word ‘software’ does not make a single appearance in the body of the report and it is not until page 63 that the word ‘code’ makes its debut.

Some assorted, and related images… 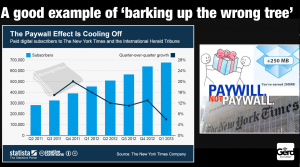 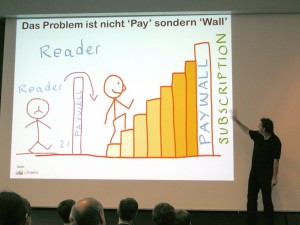 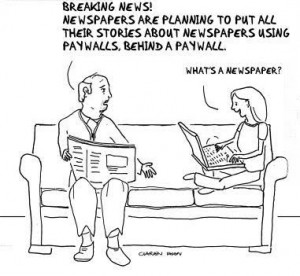