The Internet of Things and its unintended consequences: why we should proceed with caution

Download the PDF version: The Internet of Things and its unintended consequences: why we should proceed with caution   Download all my other stuff via GerdCloud/Dropbox

The Internet of Things (IoT) / Internet of Everything / Industrial Internet is sizzling hot. Everywhere I go people ask me about it. Almost every single event I speak at, some of the biggest tech & IT companies in the world are talking about their plans for the IoT, and their billion dollar investments.

Therefore, I figured this is a good time to set a few things straight, and lay out what I call the #OppChalls (opportunity – 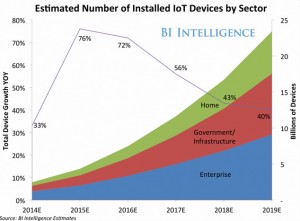 challenges) that lie ahead with the IoT.

First: yes, the IoT’s potential boggles the mind
Let me first reiterate that the benefits of ubiquitous connectivity, of very-big-and-very- real-time-data, of truly intelligent digital assistants, of cognitive computing, deep learning and robotics are obvious to anyone with even basic powers of imagination – it would indeed be foolish to not try to harness this enormous potential. The central premise of the IoT is simple: when everything gets connected, once data is being collected in real-time, everywhere, all the time, we can measure, analyse, anticipate or even predict events and ‘truths’ that were previously hidden under the surface. We can make things and processes so much more efficient, and save trillions of dollars in the process; and possibly solve global warming, as well (some experts would argue).

Clearly, a quickly evolving Cloud-OS / neural-network-in-the-cloud  of inter-connected devices, sensors, hardware and processes might well kick-off a new era of optimization and hyper-efficiency in the energy, food, shipping and logistics, media, traffic, building and construction sectors. This could be huge.

Meta-Intelligence and abundance
The IoT promises enormous cost savings by means of efficiency in the energy, utility and transportation sectors. Uber's initiatives with autonomous vehicles and Tesla's expansion into neighbouring business segments (i.e. batteries and energy) are just 2 of the most interesting examples.  A global roll-out of IoT applications could lead to a dramatic leapfrogging effect in achieving

sustainability and realising ‘circular economics’ in the near future. A global abundance of energy, food and of course content and knowledge may come within reach (as XPrize founder and author of the book ‘Abundance' Peter Diamandis keeps pointing out – see his graph on the right).

By connecting everyone and ‘everything’ and deploying machine i.e. artificial intelligence and predictive analytics many of the huge, global IoT purveyors hope to achieve some kind of meta-intelligence through an exponentially better ability to read, understand and apply data.

This new meta-intelligence may allow us to save an estimated 30-50% of global logistics and shipping / transport costs, 30-70% of the costs of personal mobility and transportation, 40-50% of energy, heating and air-conditioning expenses, and so on.
Connectivity clearly is efficiency, and the economic benefits are extremely tantalising. Without a doubt, IoT is a gigantic mission and will  dwarf the the previous ‘human + computers’ internet. Trillions are at stake – and obviously those of us leaning towards technology-optimism will find new delights here. Super-intelligence seems within reach; abundance is near, the world a better place because of technology. 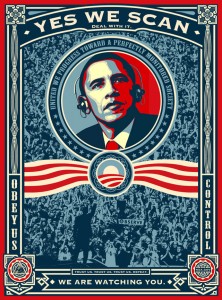 unintended consequences – than the ‘human Internet’ of today. We are already facing some very thorny and largely un-addressed issues as is (hint: privacy, security, digital ethics, a possible AI explosion, job losses through automation etc), but these wicked problems will certainly be amplified x100 in the next 5-7 years as the concept of ‘connected everything, everyone, everywhere’ becomes a reality.

Hellven challenges
In my opinion, the realization of the IoT could be heaven or it could be hell (aka HellVen), but either way the compass for this journey is being calibrated right now. First, let’s admit that the good old, pre-IoT internet of some 2.8 Billion people is no longer just all peaches, designed and pruned to ‘make the world a better place’, either. Clearly, the Internet has been fully and often ruthlessly commercialised now, with all the challenges that come with that, and with all the disappointment that comes from the loss of its collective benefit (at least for some of us).

Just consider this: 5 years ago we used Google to search the world for

information; now we are the ones being searched by Google. 3 years ago, we used Facebook to connect to friends (a word that now seems to have lost its meaning) and socialize with them; now we, ourselves, have become the content that Facebook literally feeds on while it attempts to monetise in countless unintended ways that feel quite, well, asocial to many of us. 2 years ago, we blissfully tweeted to share news, comments and opinions; now we may find ourselves flagged or profiled as suspicious, singled-out by immigration officials or put on no-fly lists if a swanky algorithm in some secret cloud concludes that our tweets won't sit right with the powers that be (as often happens in Turkey, for example).

Could the IoT turn us into things?
Have the lauded tools of democratisation, information liberation and the so-called ‘sharing economy’ inadvertently created some kind of digital feudalism or platform capitalism? Have the Internet giants silently perfected the art of surveillance by

facilitating a gigantic global panopticon? And how exactly will those that purvey  IoT solutions prevent these very real issues from mushrooming into dystopian proportions? Would a global brand of  ‘California Ideology' (“technology will solve every single problem of humanity – and make lots of money in the progress”) get to dominate?

Let's be generous (or naive) and assume that ‘big internet’ did not actually plan for these twisted side-effects to happen; that it wasn't their objective to addict us to their sweet digital temptations and juicy faustian bargains, that the unintended consequences of hyper-surveillance, loss of privacy and digital obesity were indeed not intended.  Faced with the global uptake of the IoT, we now must certainly start to wonder how much more power (i.e. access to data and the AI to process it) we want the providers of these solutions, tools, engines and platforms to have, going forward, and how all of that is to be accomplished without global (self)-regulation and independent supervision. This seems like an invitation to disaster if we proceed unchecked.

Giving George Orwell a run for his money?

Given that the leading US-based Internet platforms, cloud service providers and other technology companies can’t even keep the NSA and other ‘officials’ from ‘scanning it all’ just because they can, today; how would this challenge play out in 5-7 years when we might have 200+ Billion connected devices, and when the newly empowered BRIC / CIVET / MINT nations can easily do the same?  In its most dystopian variation, the IoT could lead to a climax of machine-thinking, the most perfect spying-OS ever devised, the largest realtime surveillance network ever contrived by man, enforcing total human compliance and killing off even the slightest pretense of anonymity. 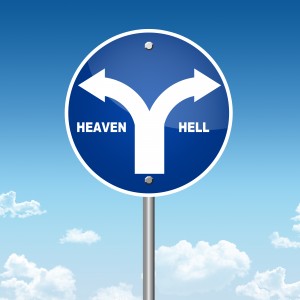 Let’s face it: The IoT could be heaven (see above) or it could be hell; but without any real rules, ethics or valid social contracts in place it will almost certainly become hell. And hell, I’d say, is not good for business, either – even the most profit-obsessed entity could not possibly see this as a good outcome.

Just imagine a world, not too far off, where your connected car communicates all of your vehicle’s data (and your mis/handling of it) in real-time/place, where all your payments are linked to your smart devices, with wallets and credit cards a thing of the past; a world in which your doctor knows how much or how little you have walked this week, what your heart-rate was while you slept on the plane; a world where your external brains (aka mobile devices) are now directly connected to your ‘wetware’ and brain via wearables, BCIs or implants, where everyone and everything becomes a beacon of data generating 1000s of gigabytes per day, collected and filtered in the cloud, with armies of Watsons tirelessly applying their hungry, self-learning deep-minds every second. Efficiency would almost certainly trump humanity at every turn- welcome to a giant machine OS that self-learns and literally feeds off our output until it no longer needs it to exist.

Let’s ponder a simple question: if we, today, can’t even agree on what the rules and ethics of an ‘Internet of people and their computing devices’ should be, how would we agree on something that is potentially 100x as large? And should we therefore not be extremely careful to proceed ‘just because we can'?

Just who exactly is in charge of this?
We have existing guidelines or agreements on what is permitted in bio-technology and bio-engineering (such as the 1975 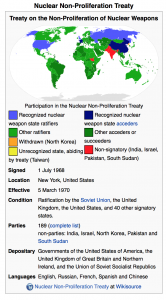 Asilomar guidelines on recombinant DNA) and we have NPTs (nuclear proliferation agreements) that are actually being enforced. Yet despite the fact that data is quickly becoming the single most powerful economic driver we don’t yet have a global treaty on what is allowed with the personal data of Billions of Internet users, or a treaty on cognitive computing or artificial general intelligence (AGI). Clearly this is one of the most glaring omissions in our society, today, and one we need to fix ASAP. Politicians must wake up to what is probably the biggest challenge of humanity in the next 20-50 years: the relationship of man and machine.

Today, big data, AI and the IoT are largely unregulated spaces at the very same time that their power are surpassing that of nuclear energy. If data is indeed the new oil (sorry… yawn if you want to), who is making sure that ‘big data-oil companies’ are doing the right thing, and who will make sure that ‘Big IoT' will do the ‘right thing for all concerned'?  Since ‘the wrong thing' could have potentially catastrophic results, I would argue that this is not something that can be taken too lightly.

Humarithms, the Human Imperative and the precautionary principle
What will keep those that run these global OSs from turning us into ‘things’, whether by accident or by design? The technology industry’s delight with the IoT and its obvious benefits not withstanding, this is a risk we should not take without extreme caution and consideration. In my view, every powerful algorithm will need what I propose to call a ‘humarithm’, i.e. the insertion of buffers and balancers that ensure a truly human 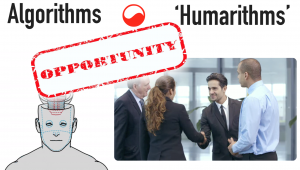 process, tempering every exponential progress of technology with human concerns, throwing a human monkey wrench between the 0s and 1s that are starting to dominate our lives. I suggest to apply a kind of digital-age precautionary principle to those entities that want to power and provide the blessings of the IoT: the burden to prove (and ensure) that it may not be unintentionally harmful to those subjected to it should be placed on them, before we go too far down this road.

Time for action!
Let’s hear some ideas about that, dear investors, merchants, purveyors and engines of the IoT, and not just about how much

money the IoT will save us, or how much new wealth will be generated. Let’s talk about a kind of technology-fuelled gross national well-being, not just about growth, and let’s not sacrifice our humanity only to become efficient machines.

My film on technology versus humanity

My 6 episodes of ‘TheFuture Show'

My CNN piece on over-connectivity

PDF with a Guardian Interview on the IoT 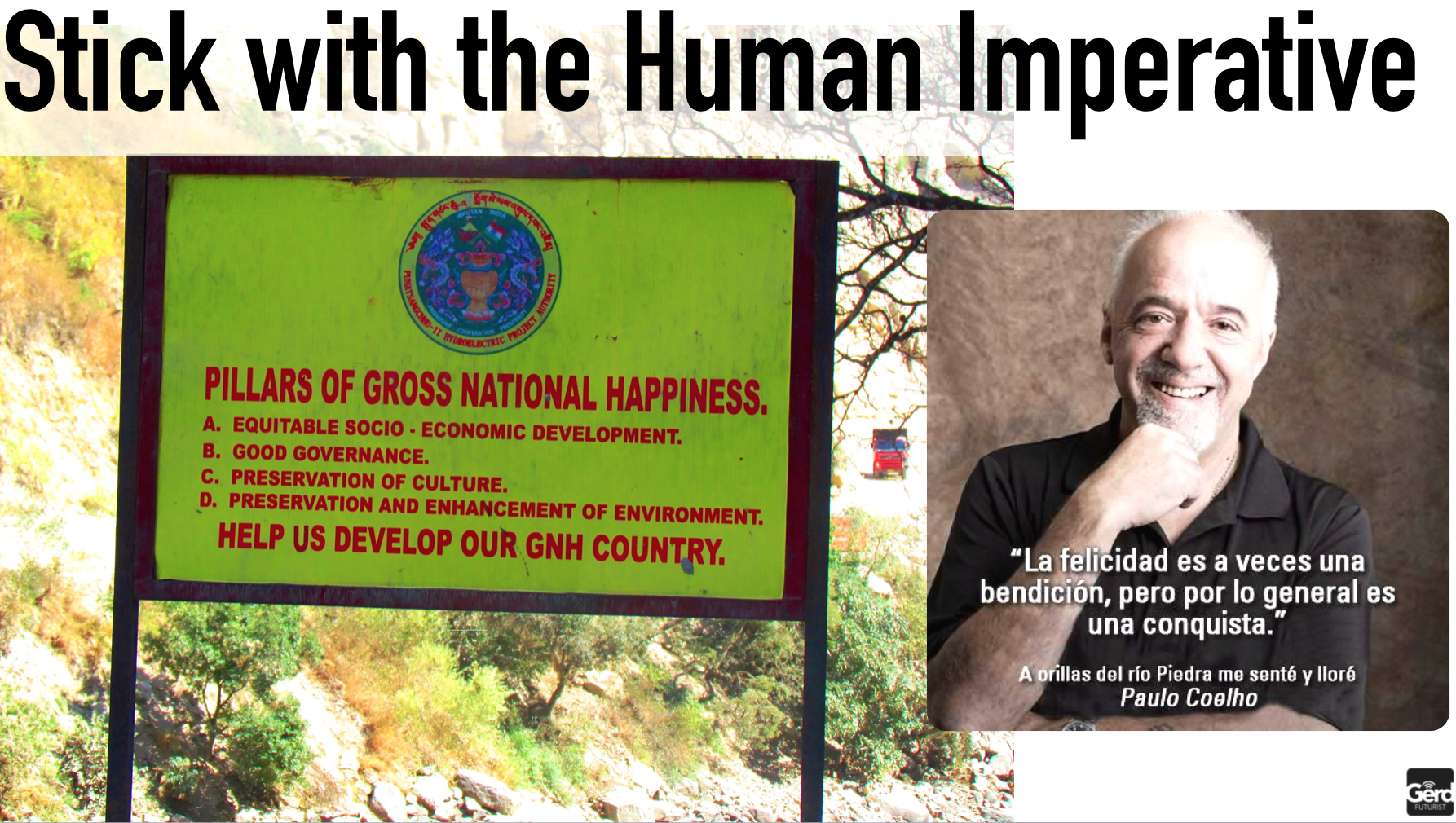 And a few related illustrations, stats and images: 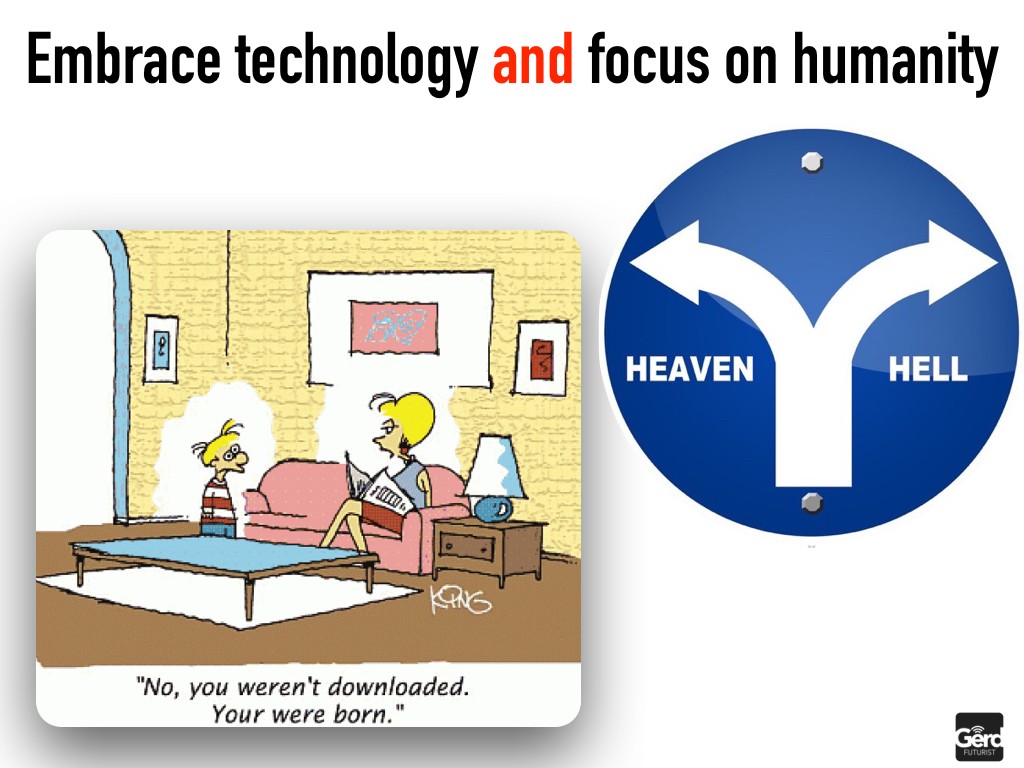 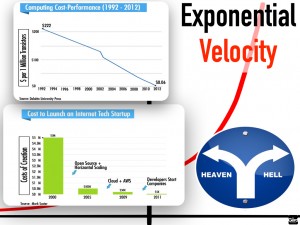 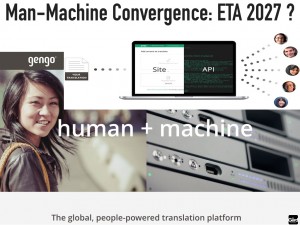 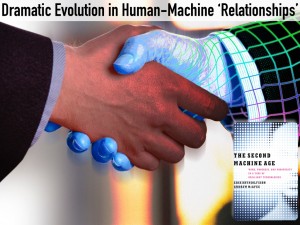 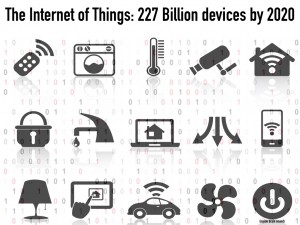 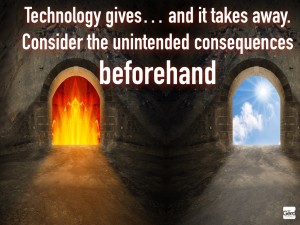 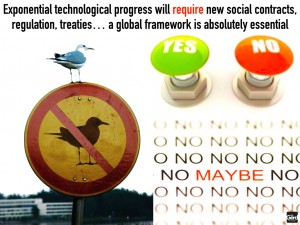 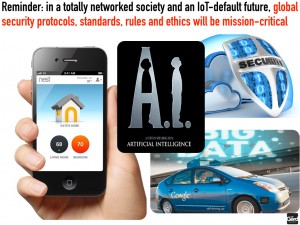 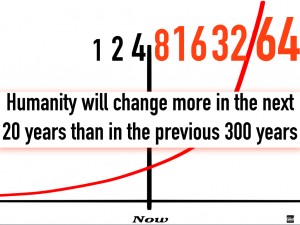 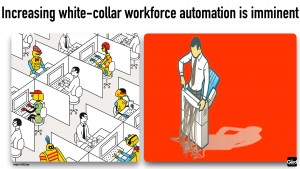 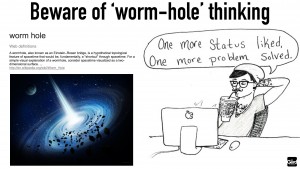 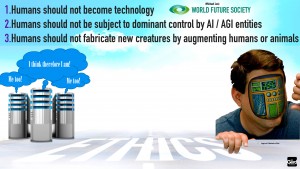 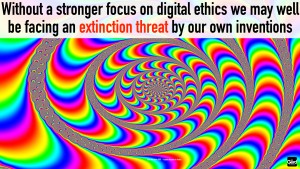 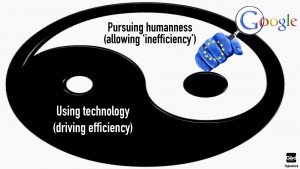 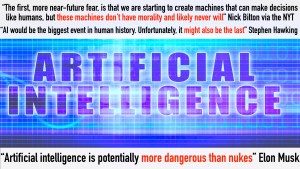 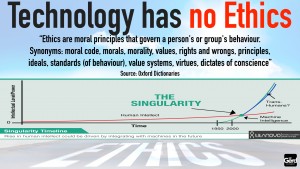 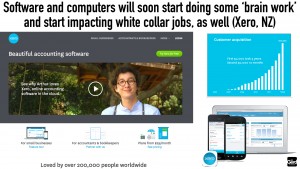 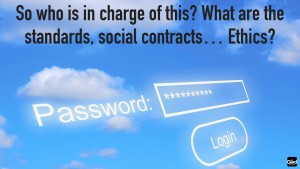 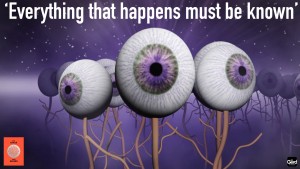 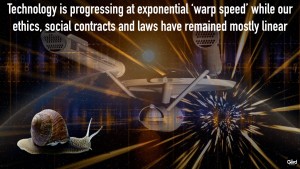 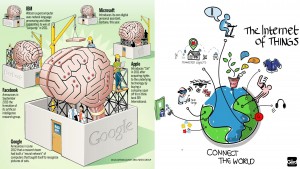