IEET just published an interview with me here. Thanks to Hank Pellissier for making this happen.

IEET: Can you expand on your comment in the video, where you say: ”we will see more changes in the next 20 years than we did in the previous 300” ?

Gerd Leonhard: This is a statement I use to exemplify the increasing exponential nature of what we are seeing in technology, today: it is increasingly true that almost everything that used to be ‘impossible’ or ‘far away’ is now becoming increasingly doable; indeed – witness genetic engineering, driver-less cars, cognitive and quantum computing, the rise of solar energy and powerful batteries etc. The timeframe for many of these dramatic pivot points to occur is not even in the dozens of years – it’s maybe ONE dozen years  – and many are already palpable. The advent of the steam engine was a huge deal, yes, and so was the invention of the Internet – but compare that to quantum computing and the possibility of ‘re-programming’ the human genome, and the order of magnitude is obviously so much larger. Plus, the changes are not just exponential they are also combinatorial (i.e combining effects) …

It is clear that the tools and computing power to monitor every data point, every movement, every image, every word and possibly every thought that we have, will exist in the very near future – for all 10 Billion+ people that we may have on earth. Many good 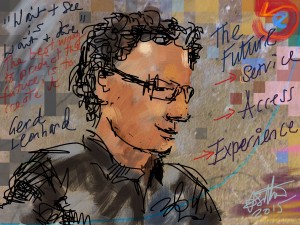 things about that, too, but if unchecked this could lead to massive abuse, wide-spread manipulation via digital media and ‘big nudging’, an utterly totalitarian system of perfect monitoring and limitless surveillance (see the new surveillance law and  ‘credit sesame’ in China), and in short, to an utterly inhuman society  where no anonymity, no secrets, no surprises, no deviations from the norm, and of course…. no real democracy could exist. The power of exponential data technologies, the cloud, the IoT, and of quantum computing and AI (both basic as well as general , and even IA) urgently needs to be counterbalanced with rules, social contracts, treaties and regulations that balance all the algorithms with what I like to call humarithms – ie that which makes life worth living for HUMANS (most of which is simply not about ‘data’ and logic). I believe that a society that no longer allows for ‘imperfection’ and general humanness would be very short-lived (and indeed.. probably our ‘last invention’)