The Coming Clash Between Man and Machine: Technology versus-and-with humanity?

The Coming Clash Between Man and Machine  by Gerd Leonhard, Future Thinker, Author of Technology vs Humanity

You may be busy posting your latest updates on social media or Christmas shopping on Amazon, but maybe unbeknownst to you we are living through the most significant days in human history. Not only is computing poised to soon become ‘conversational', invisible and ‘cognitive' and surpass the capabilities of a single human brain (the much-vaunted Singularity) but soon after that it will be poised to overtake the cranial capacity of all humans ever, period. When that happens, and we find ourselves already on the cusp, life on earth will have changed.
In the recent hundreds of thousands of years that men and women have inhabited this planet we have constructed some telling myths and stories. You may or may not count religion as a myth, depending on your persuasion, but it safe to assert that nationalities, for instance, are murky fictions carved into the rock of an indifferent planet. Not one has a premium on biological superiority or continued existence. What will happen now when all humans are reduced to inefficient wetware? What will happen to our evolutionary needs when actual physical exercise will no longer be of vital daily importance and acquired skills such as languages or even handwriting become unnecessary?
In my new book Technology vs. Humanity  I address these and other vexing questions, sometimes too big quite frankly to fit into a book. Take exogenesis, for instance. Most of us have never heard of it, but sometime in the future human birth outside the body may not only become possible but perhaps preferred and (even) enforced. If that feels too HG Wells for you, too Jules Verne for 2016, just consider that Mr. Verne had to stop writing science fiction during his own lifetime because reality had already caught up on his dreams. When HG Wells created THINGS TO COME in 1936, the Western world prepared itself for a bombing campaign that would follow in a matter of mere months. Science Fiction is Historical Fiction.

If things such as exogenesis seem a birth too far for you right now, ask yourself who will prohibit it? To date, not one dedicated community has evolved to guide or sanction the application of digital technology on a global basis – a Pandora's Box far more exponential than nuclear power. Within living memory, man- and womankind have already lived through some appalling eras of technology excellence unhitched to the slightest ethical machinery. Yet while the world obsesses about its data security, fake news and revenge porn, something far more significant is up for grabs – not just our privacy but our sovereignty, our Humanity. Maybe

we are indeed the last of the organic or un-augmented humans, and it's a dilemma that seem to strike very few souls as being a serious cause for concern – for now. Barely a soul, that is, in the monolithic tech entities that have replaced our commercial enterprises and inherited industries. We are becoming as Gods, and it's the most precarious moment in the entire tapestry of human existence – the moment when Brain Computer Interfaces and ingestible chips will start changing our code.
Is it a time for alarm? Far from it. Keep going, boys and girls in the Silicon Valleys. Keep peddling the dream. The first victims in the coming clash between man and machine will be the digital dreamers. By the time we learn the meaning of Digital Ethics it may already be an anchronism. What would Socrates say? Or Confucius? Or Einstein? I believe they would counsel caution – and a tribal pow-wow.
Gerd Leonhard travels the world and the future in search of the zeitgeist and things to come.  New book: technology vs humanity

Some select Technology vs Humanity imagery 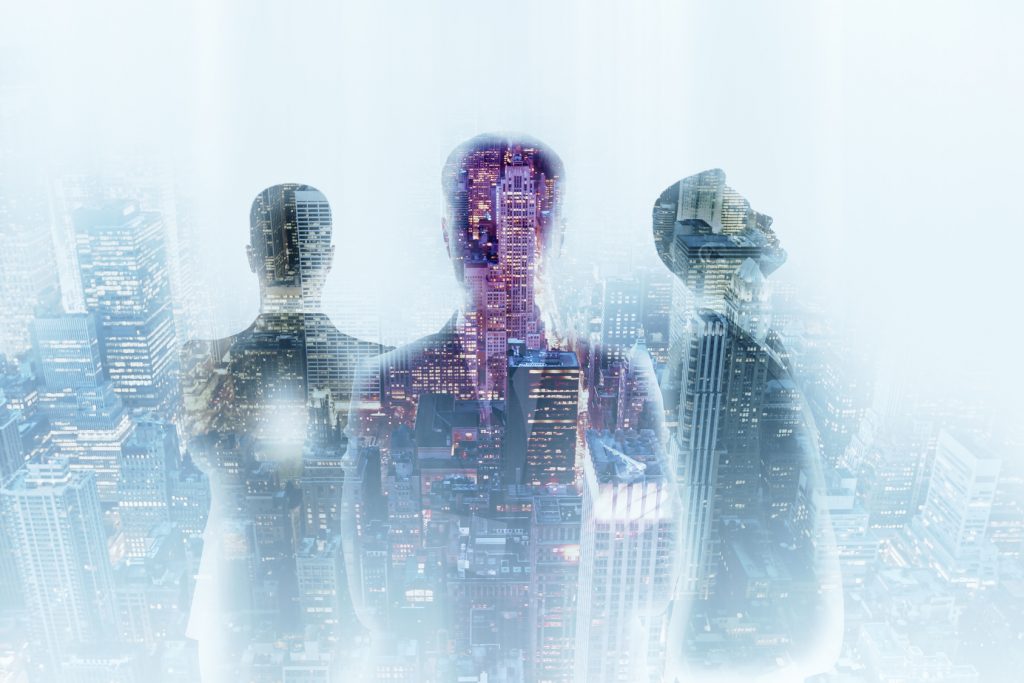 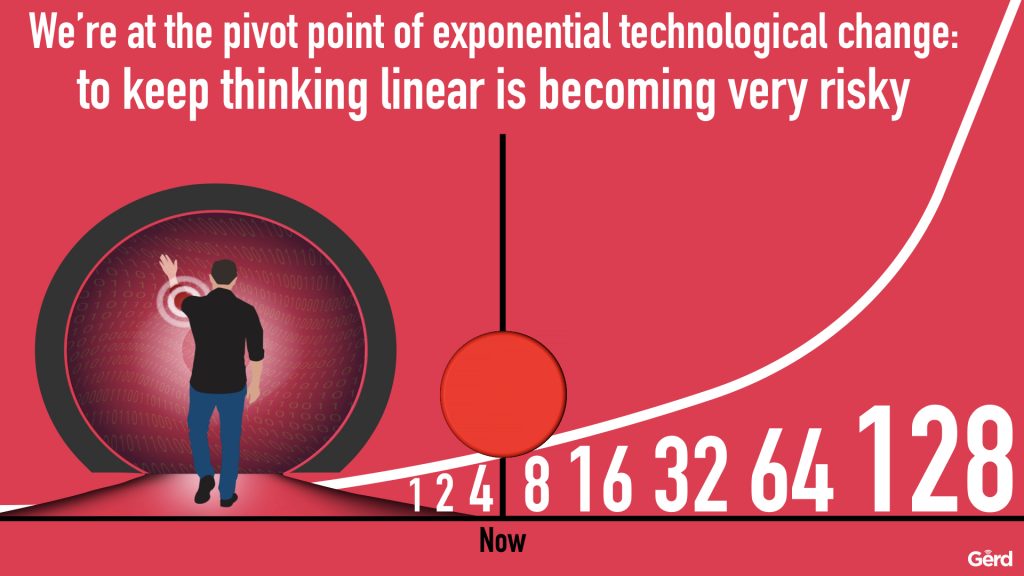 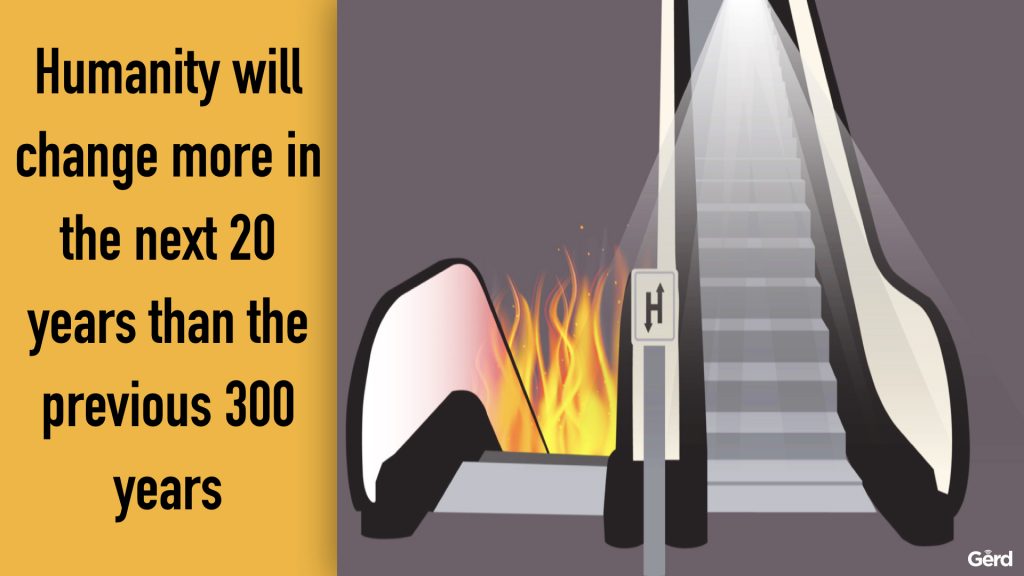 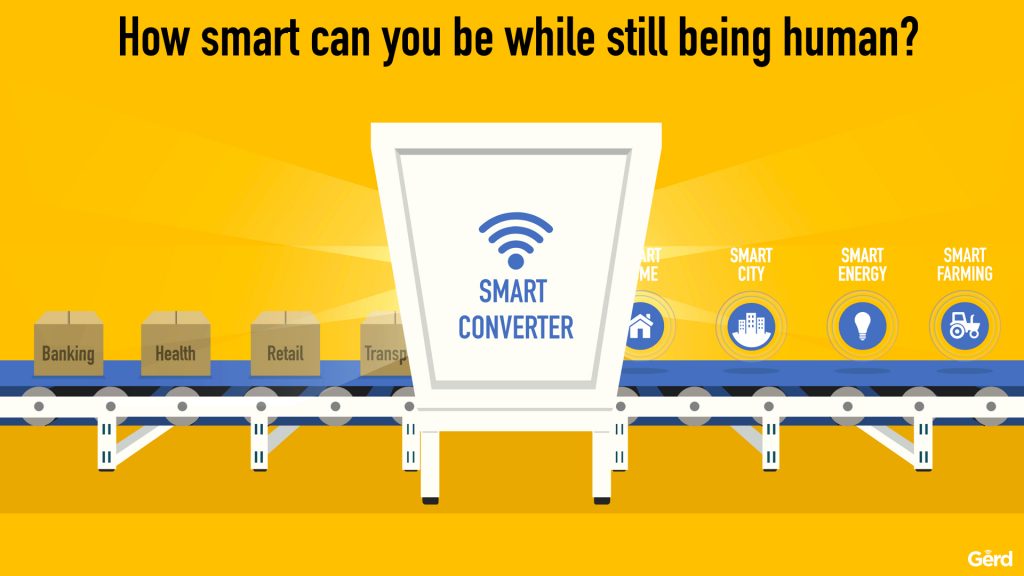 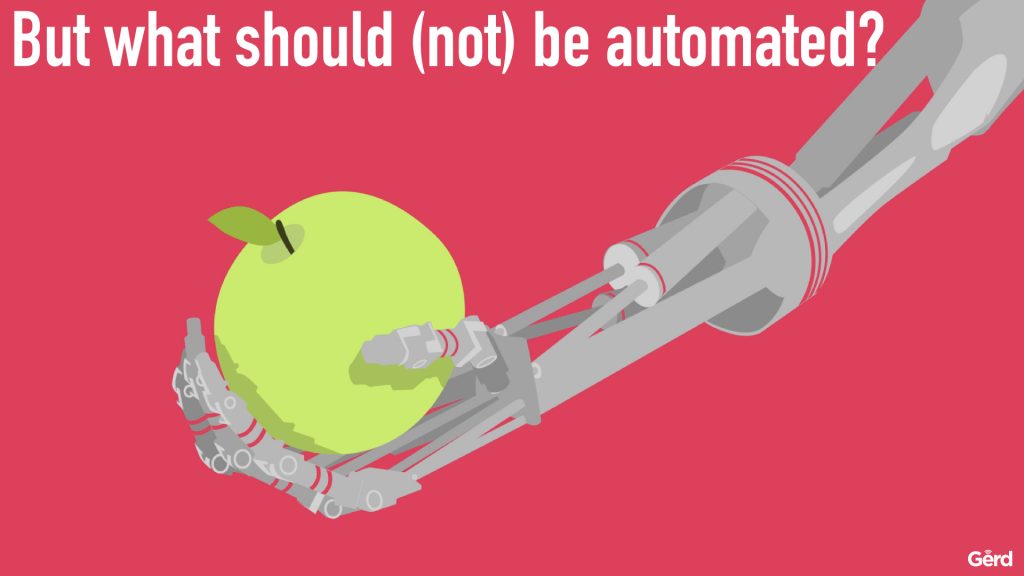 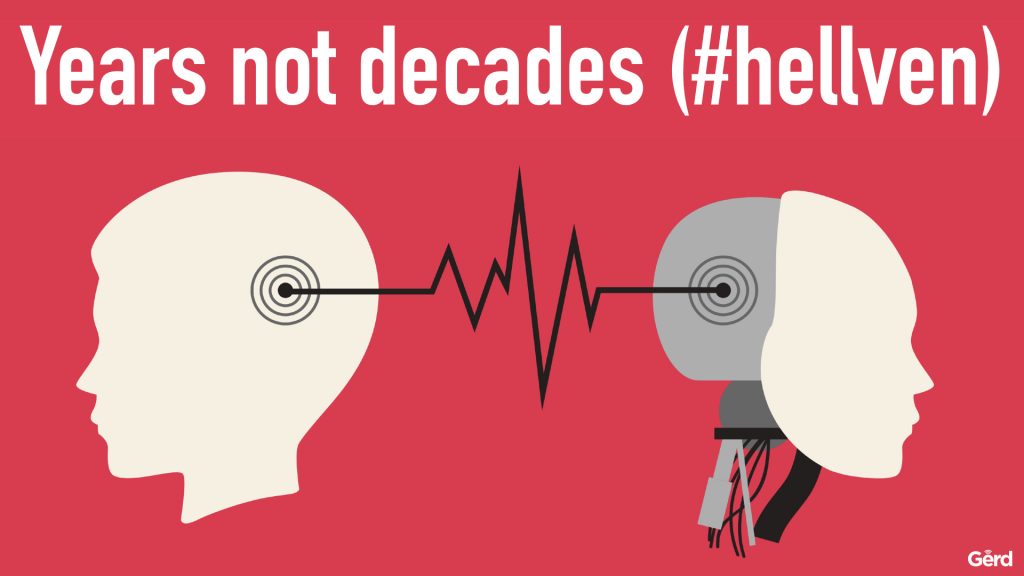 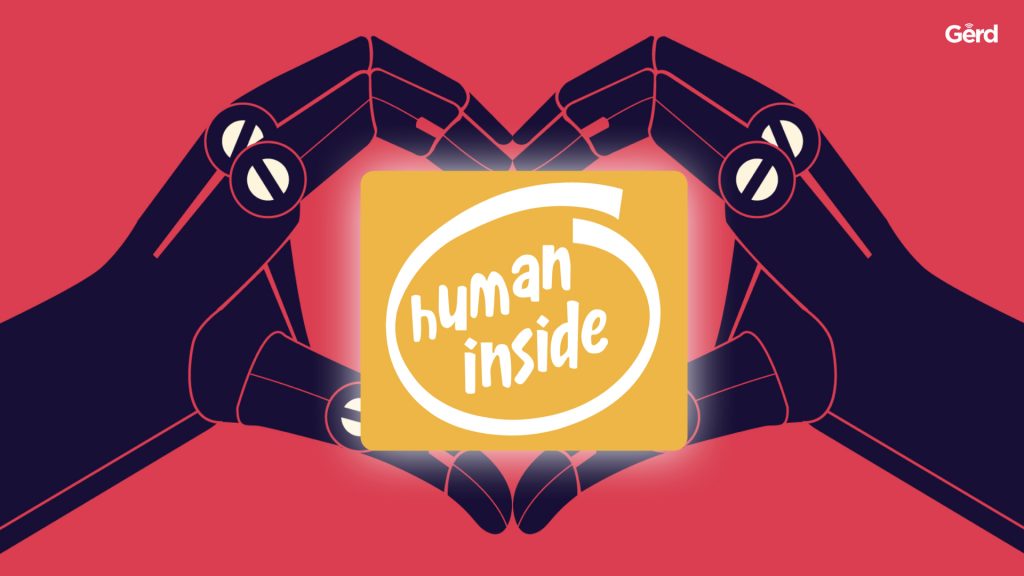 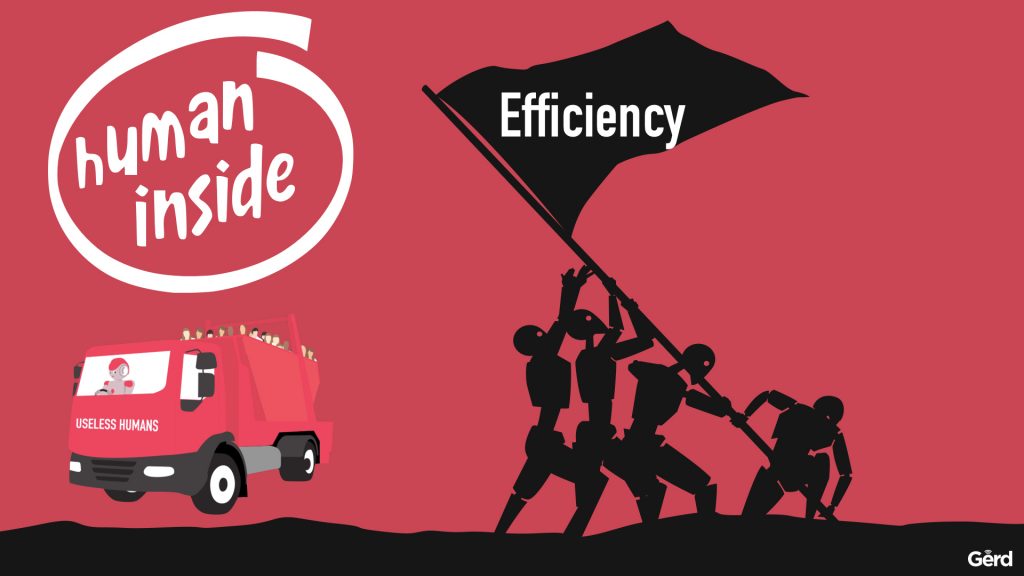 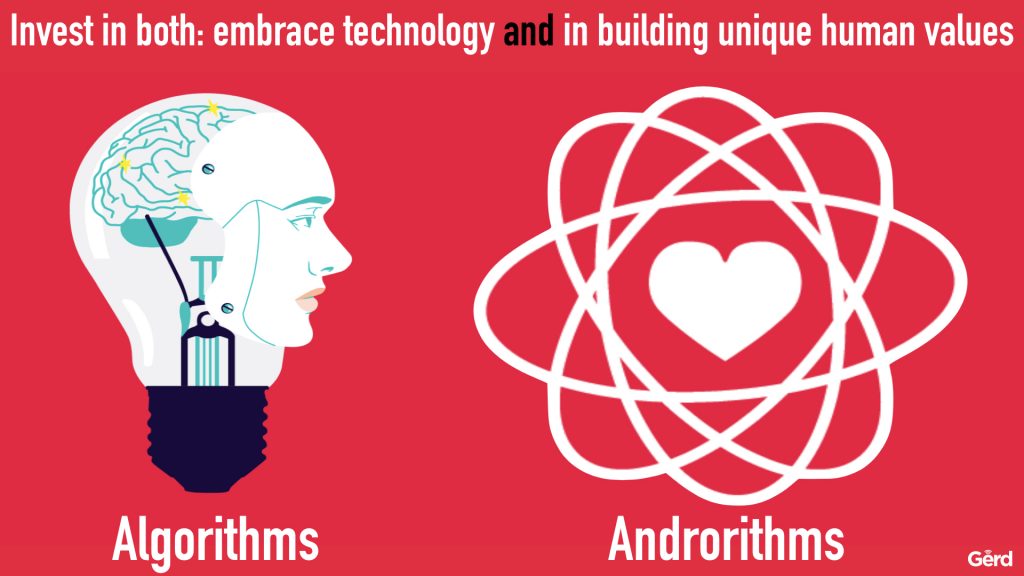 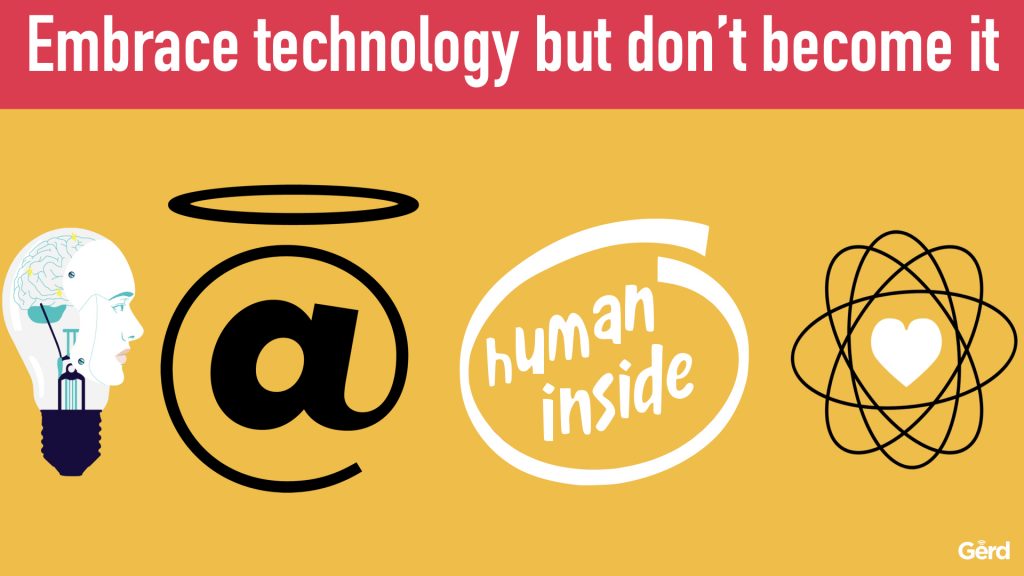 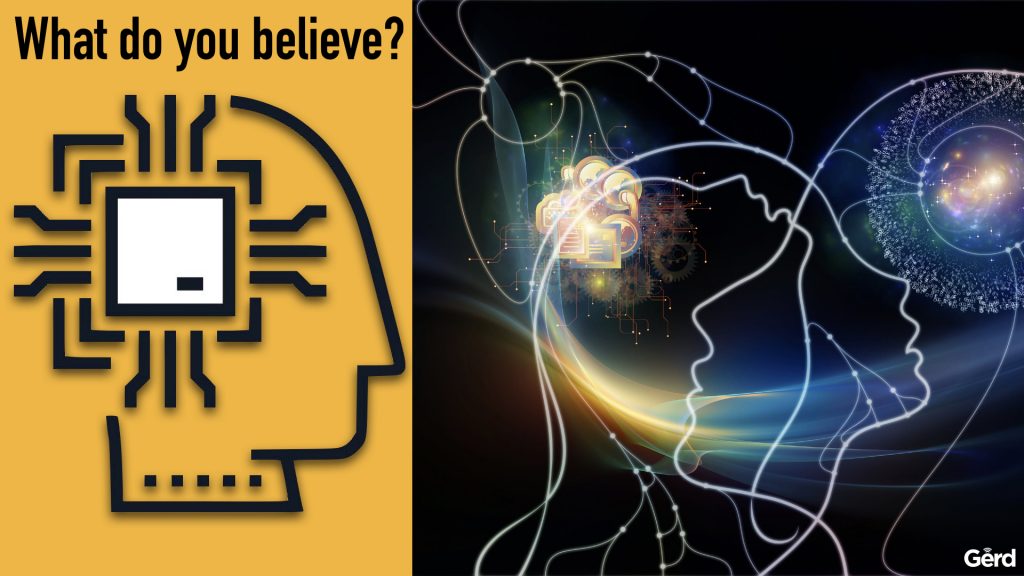 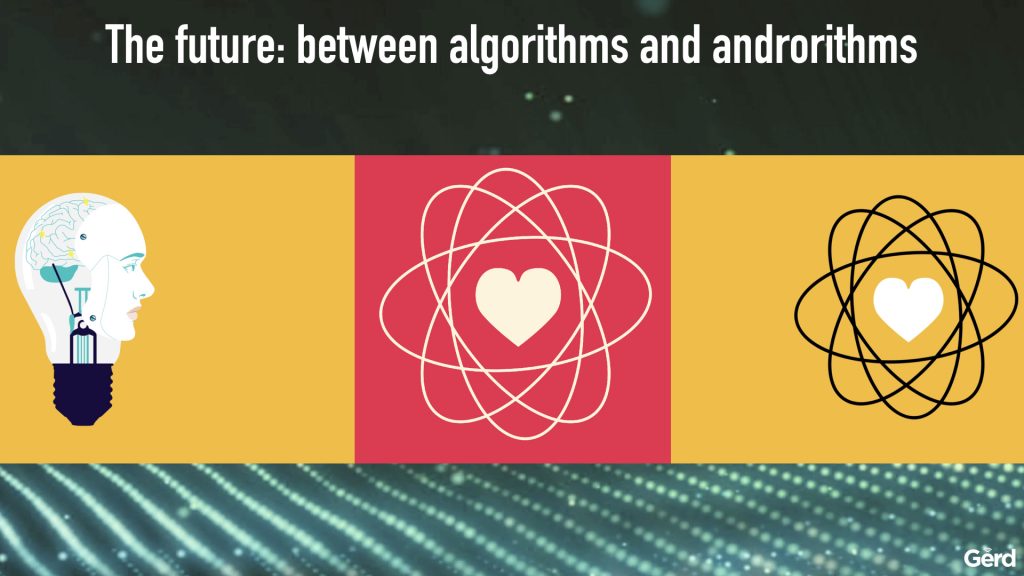 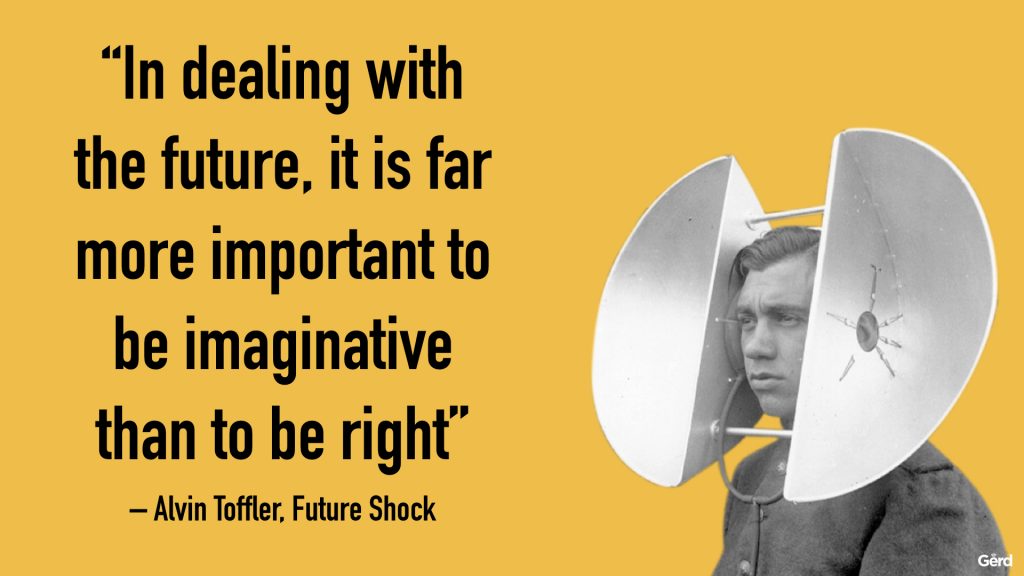 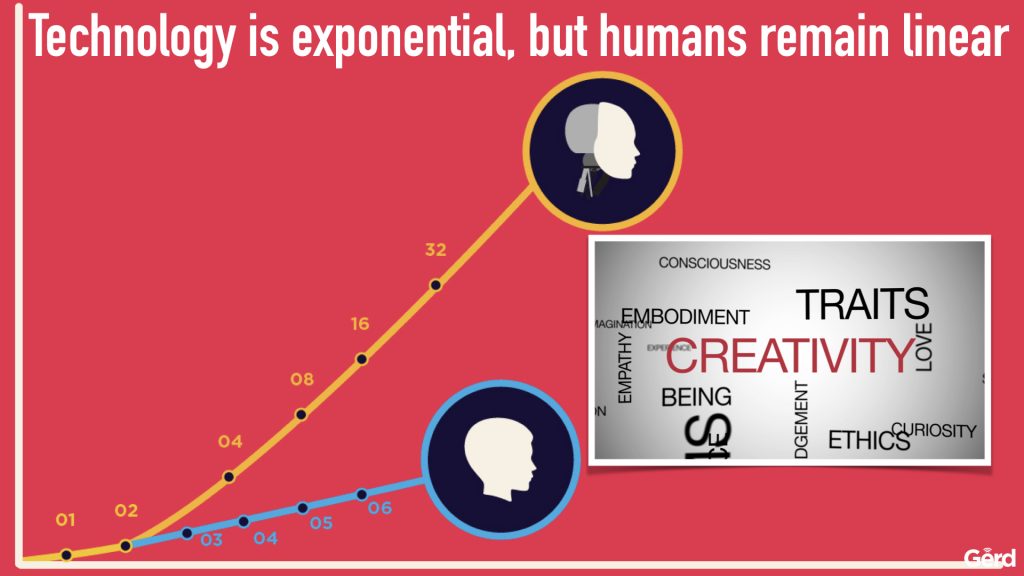 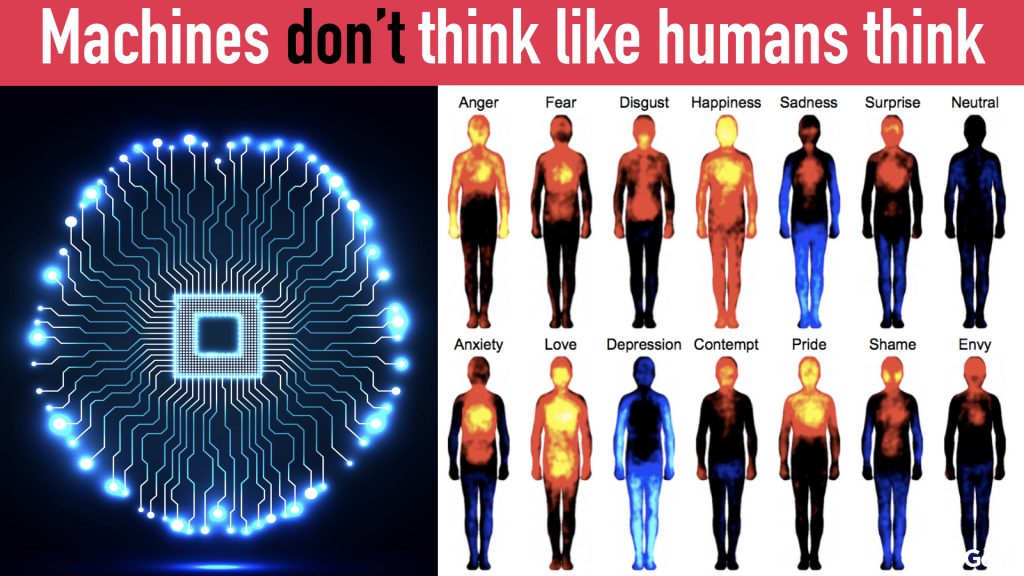 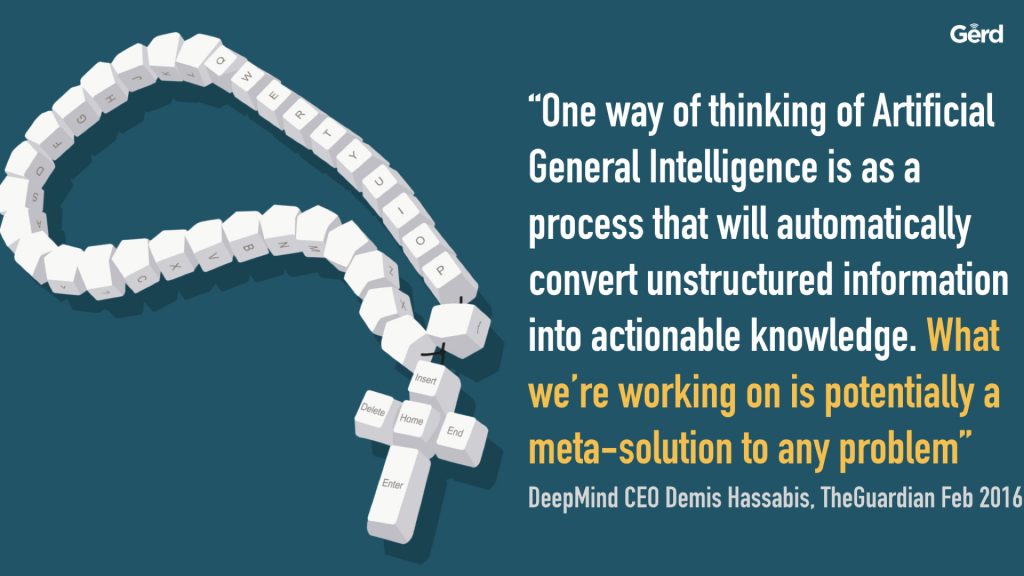 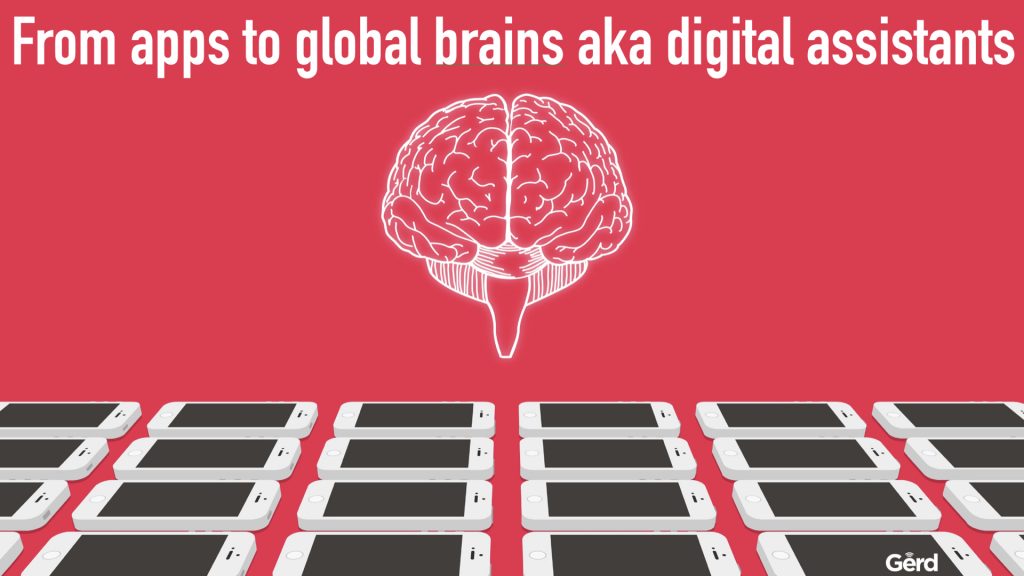 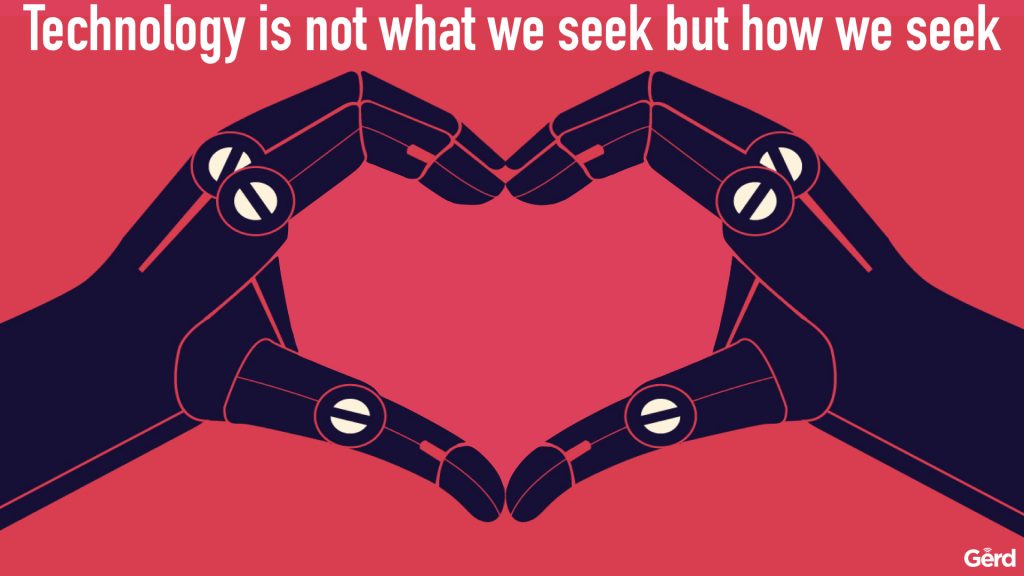 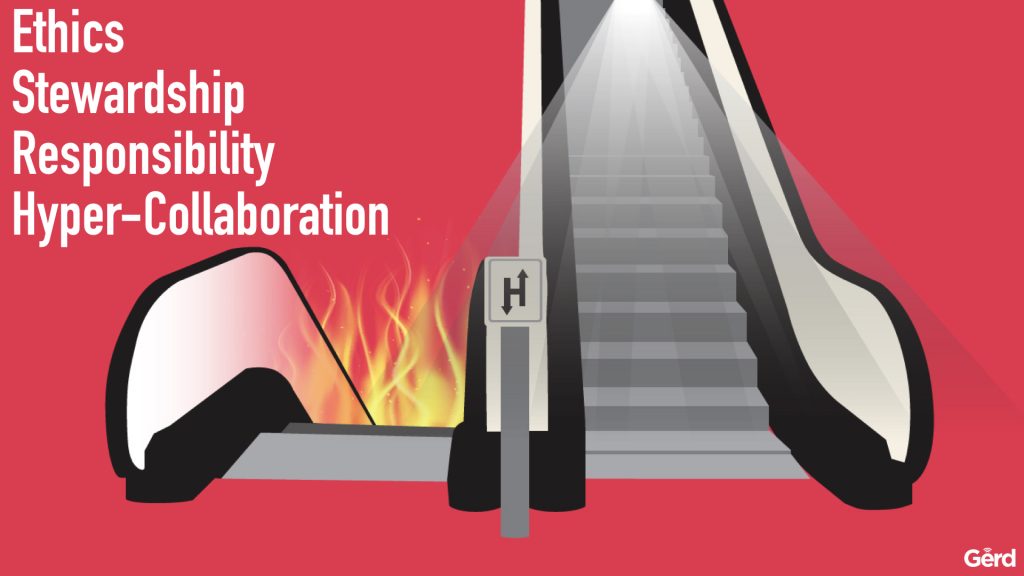 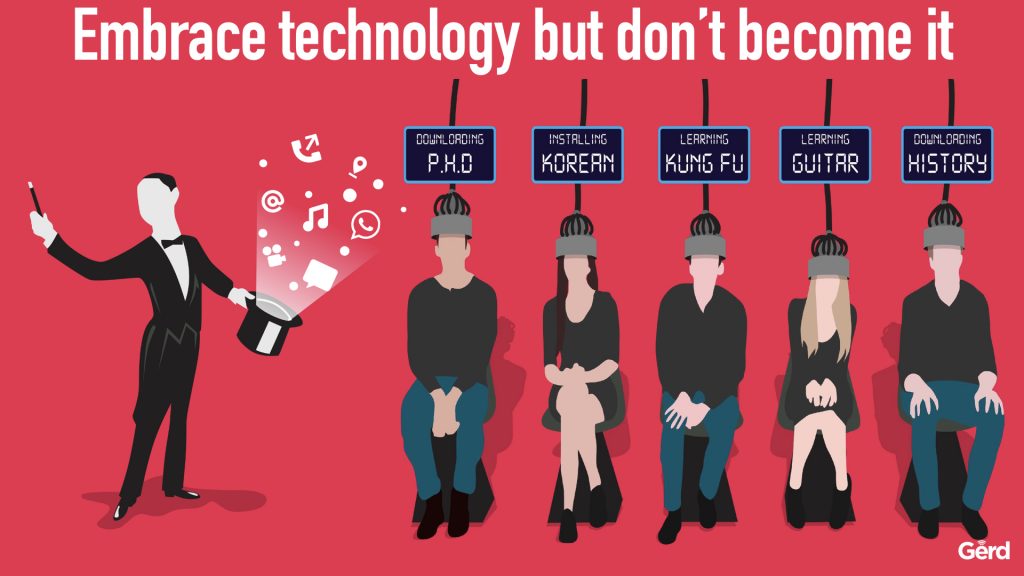