Last year's reports that some apparently well-funded Russian entities used Facebook to systemically disseminate fake news and seed widespread dissent during the 2016 U.S. elections is not only worrisome because of the damage that is being done to the democratic process, the impact on the credibility of social media and the overall trust in the Internet as a medium. It also shows how Facebook has – intentionally or inadvertently but lucratively, either way – built a gigantic manipulation machine that is run by algorithms (or dare we say ‘artificial intelligence‘), not by people, and, crucially, not for people.

Facebook – a company now valued at half a Trillion USD –  has now emerged as the world's first AI-run media platform; as ‘asocial media'. Its purpose is no longer its users i.e. to ‘be human', rather, FB's purpose is itself. The tool has truly become the purpose (read McLuhan!), and we, the users, just exist to feed it – convenient fodder for the deep-learning algorithms whose only ‘mission' is to have us stay on the site or use the app as long as possible, or otherwise become addicted to the pleasure-trap that Facebook has so cleverly perfected. Watch this video for some pretty mind-boggling quotes from the people that have actually been involved in building it.

Facebook is masterfully tempting us to build ‘mediated relationships' with screens, devices, the cloud and soon, via augmented and virtual reality, rather than with real people that are right in front of our noses. Facebook has ingeniously replaced real human friendship with an almost black-mirror type simulation (a kind of ‘demented reality’, imho) that feeds off the human need for positive affirmation (and dopamine). And now, Facebook says it wants to ‘fix this issue' by overhauling how its newsfeed works!  Thanks, Mark, but maybe this is too-little-too-late; and in addition to the media publishers that are seriously upset about this, the stock-market will question FB's future, as well. And no, it won't solve social media addiction, either.

I argue that Facebook has become exactly the opposite of social since there is absolutely nothing social about an algorithmic meta-brain whose only concern is to get inside our heads and manipulate our thinking so that it and its advertisers can sell more stuff to us. Imho, it is quite clear that Grandmaster Zuck has a similar hunch – one only has to read his latest manifestos to understand his thinly veiled confession: “I have created a monster (a kind of socio-cultural time-bomb, see my gif below) and I wish I knew how to fix it without cutting our valuation in half”

The paradox that Facebook has become is already driving peak-loneliness among its power-users, it's causing widespread disinformation by its machine-driven distortion of news, it's the #1 creator of filter-bubbles, it has eaten the lunch of newspapers, publishers, and media companies without giving much back –  and its revenue-growth is staggering.

I've said this for almost a decade, now: ‘data is the new oil' –  and maybe now is a good time to add Andrew Ng's prescient meme that ‘AI is the new electricity'. We must realize that Facebook is essentially a data-oil company, with increasingly excessive power and devoid of any considerations of the externalities it creates – and therefore it should be regulated just like we regulated big oil (and yes, this goes beyond Facebook, of course).

No matter what Zuck's good intentions (which I think are credible) will actually amount to, I don't think Facebook will significantly divert from its current path of ruthlessly monetizing human relationships and fundamentally changing our societies without regulation and supervision. After all, this is how they make (or shall we say, made) Billions!

“Ethics is the difference between doing what you have the right (or the power) to do, and what is the right thing to do”  (riffing of Potter Steward)

Zuck may indeed have solid ethics (or he might just be trying to rediscover them) but the monster he has created is now a MACHINE in the true sense of the word.  A machine that inhales us and our data, digests trillions of stream per day, makes digital copies of ourselves and sells us on to those that want to manipulate our thinking (I guess that just might be the most honest definition of ‘digital advertising'?).

Facebook is extremely unlikely to voluntarily ‘do the right thing': being responsible for what it is, what it does, and what it makes possible, as the world’s biggest platform for what we used to call ‘news', and for social connections. It will not voluntarily put the ‘human inside’, and deeply care about or contribute to the flourishing of our collective humanity, simply because doing so what put sand in the gearbox of their giant money-making machinery. It has, sadly, been perverted to exploit friendship not to protect it.

For me, personally, it is even more disconcerting and somewhat embarrassing to notice that despite this realization (which I already wrote about in 2016, here) it is quite literally impossible for me and for many users and small businesses like me to drop Facebook completely – in my case, approx. 70% of my various sites' traffic comes from Facebook. Having said that I am getting ready to cut all FB ties, anyway – I have been wondering if advertising on Facebook is actually morally indefensible, and have thus discontinued the practice.

The only possible conclusion is this one: we must ‘encourage' i.e. require Facebook to become responsible for what it is and for what it enables. We must require them to live up to being a media company, with at least the same requirement that other media companies are subject to. Maybe this means we must urge Facebook to become HUMAN again, to care about construction, not just about disruption.

If we don’t start with those global platforms like Facebook, it is not just our democracies that are in danger, it is also our humanity.  Put the human back inside, Mark!

Check out my new book Technology vs Humanity – it addresses many issues related to this post.

Facebook Can’t Be Fixed – by John Batelle “Facebook’s fundamental problem is not foreign interference, spam bots, trolls, or fame mongers. It’s the company’s core business model, and abandoning it is not an option”

The Great Awakening: How our thinking about technology fundamentally changed in 2017 and where we go from here.
by Arianna Huffington  MUST-READ

Image above via The Atlantic 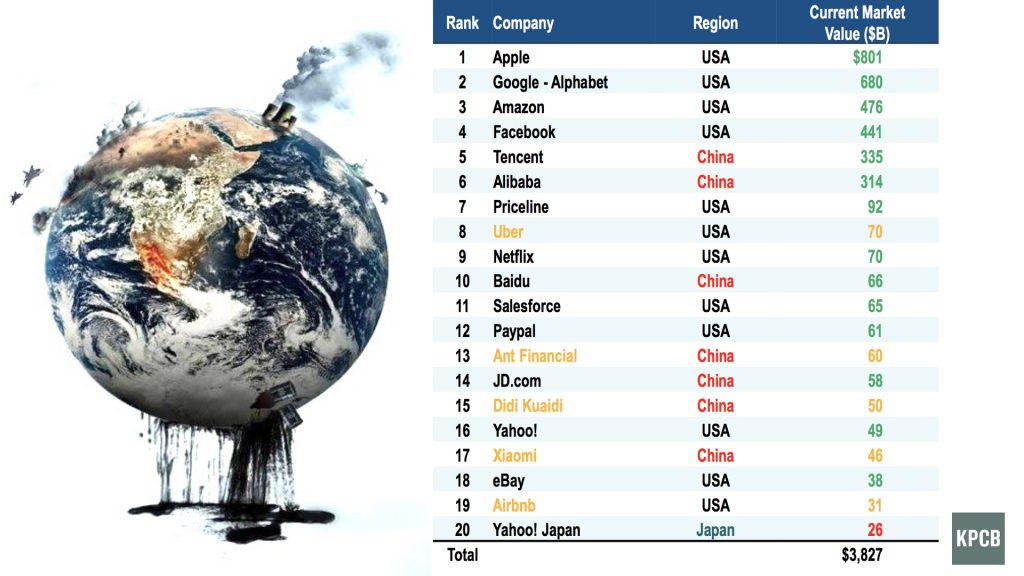